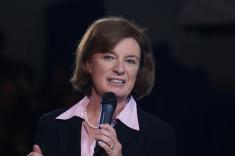 Carol Shea-Porter (D-NH) is one of the seven incumbents endorsed by Blue America. Like the 6 other candidates on our list, Rep. Shea-Porter opposed continued funding for the occupation of Iraq on Thursday and split with the Democratic leaders on Thursday over FISA’s retroactive immunity. She voted with most House Democrats in standing up to the leadership on both issues, knowing full well that New Hampshire voters are eager to see the war in Iraq come to a speedy, responsible end and that the “Live Free Or Die” motto is something they take seriously there– and that it doesn’t include warrantless wiretaps.

She’s joining us for questions for an hour today.

Congresswoman Shea-Porter serves on the House Armed Services Committee and few members have worked as tirelessly as she to help veterans and the men and women serving in our armed forces. “What the Bush Administration has done to veterans and to the troops,” she told me last week, “was to send troops off to war while cutting benefits… they did not support the troops or the veterans. Looking at the backlog in cases, the number of people who were turned away for traumatic brain injuries, for post traumatic stress syndrome, and because of all of the problems they got because they were sent to war is outrageous. Veterans are suffering from Bush’s misguided war and we will be paying– trying to fix these problems– for many years to come. We simply must honor our commitments to these men and women by being there for them and providing them with veterans’ benefits. The real cost of this war isn’t simply the money that we’re seeing right now, which is horrific: a billion dollars every other day and the deaths and casualties on the battlefield. It isn’t just that; it is also caring for these men and women and their families for decades to come… The real cost hasn’t even been calculated yet.

The ineffectual right-wing kook she beat in 2006, Jeb Bradley, is challenging her again. If you’d like to help keep a real progressive in Congress, you can volunteer here and donate here.