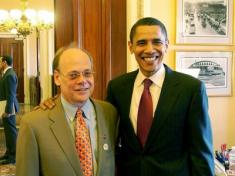 In 2006 your donations through Blue America helped elect 13 new Democrats to Congress : Senators John Tester (D-MT), Ben Cardin (D-MD), and Amy Klobuchar (D-MN), Congressmmebers Mike Arcuri (D-NY), Bruce Braley (D-IA), Chris Carney (D-PA), Kirsten Gillibrand (D-NY), John Hall (D-NY), Paul Hodes (D-NH), Jerry McNerney (D-CA), Patrick Murphy (D-PA), Ciro Rodriguez (D-TX), and Joe Sestak (D-PA). We also helped set up races for this November for Victoria Wulsin (D-OH), Eric Massa (D-NY), Larry Kissell (D-NC), Charlie Brown (D-CA). And then, of course there was Donna Edwards, our proudest achievement of all, who won her primary and then a special election and is now a Congressman from Maryland– the only member of Congress with a 100% progressive score across the board.

Last night Blue America had its second big win of 2008 when Memphis Congressman Steve Cohen beat back a vicious, racist, anti-Semitic attack by the reactionary Harold Ford Machine. Cohen beat right-wing Democrat Nikki Tinker 79.34-18.64%, sending a message that Republican messaging does not work in Democratic primaries. Abandoned by Inside the Beltway operations like the DCCC– as well as by Speaker Pelosi– and even up against a now chastened and embarrassed EMILY’s List, the assistance Cohen got from progressive CBC members like Jesse Jackson, Jr and John Conyers plus help from netroots allies like Blue America, helped him meet the challenge. We won; let’s keep it going. Please consider making a donation today to the most vulnerable of the Blue America incumbents, our steadfast friend, Carol Shea-Porter (D-NH), who is being pummeled by the GOP front group, Freedom’s Watch. We can’t afford to lose someone of the calibre of Carol. There aren’t many like her. If you have anything to spare, even $5 or $10 is very much appreciated. It’s small donors who made the difference in all of our wins and it’s going to be small donors who give Carol the chance she needs to get her message out. Here’s the Blue America ActBlue page, open 24/7.

We’re going to the chapel because love is in the air today at Mike’s Blog Round-Up! “Now anyone can catch the bouquet!,” @Tengrain says. https://t.co/zvOu4kL9p9

"Every accusation is a Confession." https://t.co/MWM84gHMRo