Blue America Welcomes Eric Massa For A Talk On Afghanistan

Last night two of the blogosphere’s brightest lights posted on the difficulties Obama is facing when it comes to turning around U.S. Afghanistan policy. Digby, who recounted a 1964 conversation between McGeorge Bundy and President Lyndon Johnson about the futility of American policies in Vietnam, seemed aghast that “Democratic strategist” Donna Brazile was on CNN yesterday seemingly reading some leftover talking points from Karen Hughes about the need to stay in Afghanistan and “get the job done.” Then last night Daily Kos’ most prescient Afghanistan blogger, Meteor Blades, highlighted the controversy over Andrea Mitchell’s report on the 500,000 troops needed to do the job in Afghanistan.

But as Rep. Eric Massa (D-NY), our No Means No guest today, asked me this morning, “What is the job?”

Blue America’s friendship with Eric Massa goes back to the very beginning of our PAC and he was one of the first candidates we ever supported. Ultimately it was his character that moved us to endorse him, although his championing of issues impacting the real lives of working families (like “fair trade” over so-called “free trade”), his dogged support of single-payer health care, and his spot-on analysis of the war in Iraq based on experience as a Naval officer are what first drew us to him. He came close in 2006 and he triumphed in 2008– in one of the only districts in New York that Obama didn’t win! Obama tool 48% in NY-29 while Massa scooped up 51% against a multimillionaire incumbent and Bush tool.

In June, Eric was one of only 32 Democrats to vote against the supplemental war budget — of the 90 who had pledged to vote no. It was an incredibly courageous political act, particularly in a district with a daunting R+5.48 PVI (one of the most Republican districts in the country represented by a progressive Democrat). This morning Eric told me in no uncertain terms that he would “continue to vote against any supplemental.”

We’re not going to fund any wars in a way that no one knows about. The Republicans gave the wealthiest Americans the largest tax cut in history and then launched two wars without any idea of how to pay for them. It was the most fiscally irresponsible action they could take– and they took it.

Eric is fired up and full of fight, as always. He loves his job and told me he’s absolutely committed to it. “I’m in the right place in my life doing the right job for the right congressional district. And I’m just getting started.” Right now, you hear the lifelong military man in him when he says he’s very supportive of what he calls “the president’s strategic pause to formulate whatever strategy his administration will implement (in Afghanistan).”

For instance, is this about fighting the Taliban or fighting al-Qaeda — two distinctly different groups — or is it about creating a democracy, or is it about protecting the Afghan people? These are very different missions that require very different resources. And until we know what we’re doing, we cannot begin to get it done. The first thing a military officer asks is ‘What is the mission?’ And as of right now, that is a very legitimate question.” 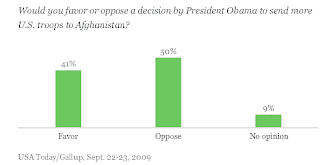 As progressives and men and women of common sense, we should demand a strategy that turns the destiny of Afghanistan over to the Afghans so we can get out of there as soon as possible. If the condition of our departure is creating a Jeffersonian democracy, then we are on a fool’s errand.

Eric is joining us now (in the comments section) as part of our ongoing series on Afghanistan policy at Crooks and Liars. As MoveOn mentioned in the mailing this morning, “U.S. policy in Afghanistan has reached a pivotal moment. President Obama is poised to make a critical decision about the Afghanistan war in the next few weeks. And there’s a big debate happening right now about what to do. Pro-war advocates both inside and outside the administration — including John McCain and Joe Lieberman — are calling for a big escalation. The general in charge of Afghanistan is expected to request tens of thousands more troops, and that may just be the beginning. They’re cranking up the pressure for an immediate surge.”

Eric Massa is in a unique position to help us figure out a progressive strategy for dealing with this dilemma. He’s adamant that if the President asks for more funds for the war, he do it through a normal budgetary process that includes a “clearly articulated strategy with an end game. The Republicans say they’re all about fiscal responsibility? Then they should agree we should apply those concepts to wars.”

Please take a look at Blue America’s No Means No! page and consider donating to Eric and any or all of the 32 other Democrats who have already done the right thing by voting no on the supplemental budget 3 months ago and who we will be counting on to help end the occupation of Afghanistan in the coming months.