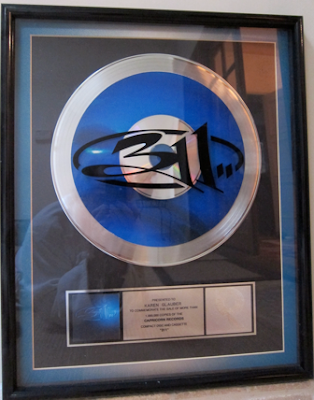 Tomorrow at 6AM (PT) we’ll do two things: award the congressional candidate who had the most donations– not the most money, the most people donating– a $1,000 Blue America PAC check; and we’ll randomly chose one donor to get the RIAA-certified 311 platinum award pictured above. So, there’s still plenty of time for you to “vote.” You do it here.


Although it’s close enough so that it could go any way, the two leaders right now are Nick Ruiz, who’s running in central Florida against Republican anti-Social Security reactionary John Mica, and Pennsylvania state Senator Daylin Leach, who’s running for the open congressional seat being abandoned by New Dem Allyson Schwartz in northeast Philadelphia. All the statements are on the page but here are the two that have the most votes so far. Daylin:

“At a time when corporate profits, executive compensation, the stock market and wealth disparity are at near record highs, it is obscene to even consider balancing our budget on the backs of seniors and veterans. I fully supported President Obama’s election, but I can’t support any drift towards corporatism to appease tea-party extremists. If we are really serious about ensuring the solvency of Social Security while preserving benefits well into the future, there is a simple solution. We should raise the cap on income subject to the payroll tax from $110,000 per year to $200,000 per year. This is fair, reasonable, and keeps faith with those who rely on Social Security to survive.”

“I would never vote to diminish Social Security benefits. These benefits cover retirees, widows, children, disabled persons and veterans– none of whom receive enough as it is by current economic standards of reasonable cost, inflation and common decency. In fact, it’s part of my platform to actually increase Social Security benefits, financed by lifting the FICA cap, and Wall Street cost-sharing. My GOP opponent, John Mica wants to CUT Social Security benefits and make seniors retire even later in life, at 70 years of age. It’s unacceptable. Help me stop him.”

Just a handful of “votes” separate these two– and separate them from the other candidates. So, please don’t forget to vote before 6AM tomorrow. Again, here’s where you can do it— a place where one dollar counts as much as $100.

I have some exciting news. I am taking a leave of absence from Fordham Law School to work for the great New York State Attorney General @TishJames as a Special Advisor and Senior Counsel for Economic Justice. I’m proud to join such an extraordinary office.

Erm, the Trump White House literally revoked @Acosta's WH press pass and then put out a deceptively-edited video to try and smear him.

You can literally make up whatever you want on the (far) right and get away with it. Get 1000s of likes, in fact. What a fact-free world... pic.twitter.com/uStmvMWzXh