Alan Grayson was 30 when the B-52’s were recording “Love Shack,” “Channel Z,” “Roam” and the other classic songs that were released on their most beloved and successful album, Cosmic Thing. He had graduated from Harvard, where he had written his masters thesis on gerontology, done some law clerking for both Ruth Bader Ginsburg and Antonin Scalia and founded the non-profit Alliance for Aging Research.

Now, of course, Grayson is a Member of Congress himself, arguably the single best member and certainly the best member when it comes to the issues facing the non-rich elderly. This week, Blue America is asking one last time this cycle for our members and supporters to chip in to make sure the Koch brothers don’t succeed in November doing to Grayson what they did in 2010, when he didn’t have the resources to respond to a $5.5 million barrage of vicious, false attack ads they financed.

So… anytime all week— until Friday, October 10 at noon (PT)— everyone who contributes, any amount, to Grayson’s campaign on this Blue America page will get a chance to walk off with an RIAA-certified quadruple platinum award for Cosmic Thing. 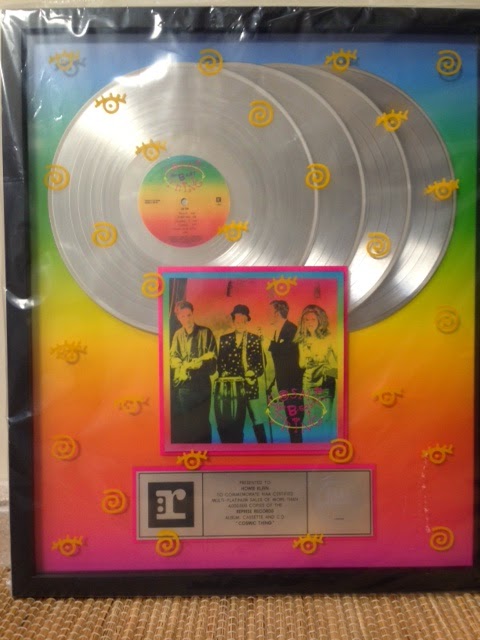 This isn’t something you can buy in a store. The band and record company awarded it to a small handful of people who helped make Cosmic Thing such a gigantic success. And there’s more. If you want to and you’re the lucky random winner, we’ll fly you and a guest to Orlando where Alan Grayson and House Democratic Leader Nancy Pelosi will personally present you with the plaque. Yes, photos allowed!

Alan has been gracious and generous with his time and efforts to help elect progressives to Congress. Here in Los Angeles, he jumped right into Ted Lieu’s battle to win a House seat against Sheldon Adelson protégé Elan Carr. Why is Grayson helping raise money for a California state senator running for Congress when he needs to protect his own seat in central Florida? Here’s why— in his own words:

The American Psychiatric Association has unequivocally condemned any psychiatric “treatment” based on the assumption that homosexuality is a mental disorder. The Attorney General has written that “a growing scientific consensus accepts that sexual orientation is a characteristic that is immutable.” The World Health Organization has said that “sexual orientation by itself is not to be regarded as a disorder.” And yet in the United States, gay teenagers have been held in isolation for months, and forced to attend this “conversion therapy.”

Except in California. Thanks to Ted Lieu.

Now Ted Lieu is running for Congress, and he needs your help. He is seeking the seat of Rep. Henry Waxman. Henry has served for 40 years in Congress, and yet he kept his seat last time with only 54% of the vote. It’s a difficult district, it’s a close race, and we need Ted Lieu in Congress.

…I’m asking you to click below, and show your support for Ted Lieu. He had the guts to take on the Religious Right when it was the Religious Wrong, and he rescued countless children from the bigoted lie that their sexual identity was a “disease” that demanded a quack “cure.” Ted Lieu deserves our support.

Blue America also supports Ted Lieu— but today is Alan Grayson day day for us. Please contribute what you can here— and good luck with the B-52’s Cosmic Thing platinum award and the trip for two to meet Grayson and Pelosi in Orlando.

Native American lands are owned and controlled by Native Americans, & they should be able to control enforcement and what goes on on those lands.