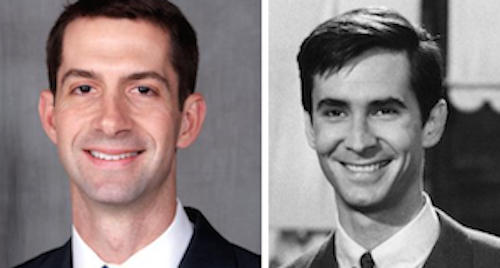 You have surely heard of a new Senator from Arkansas by the name of Tom Cotton. He was a 37 year old congressman who won the Senate seat formerly held by the conservative Democrat Mark Pryor in 2014. Cotton took the Senate by storm penning one of the most embarrassing documents ever written by a sitting Senator and then getting the entire GOP Senate caucus to co-sign it — the infamous Iran Letter.

Undaunted by this humiliation, the Republican party has decided that Cotton is the man to lead them into the future on national security issues. And unfortunately, he’s decided that his next mission will be to lead the Republican charge to extend certain provisions of the Patriot Act which are set to expire this June. They’ve even added some new powers for the NSA just to make things interesting,

This is why it’s so important for Democrats to elect more real progressive civil libertarians to congress. We cannot count on this tiny faction of libertarian Republicans, led by their hypocritical grandstanding leader Rand Paul, to ever provide the numbers required to roll back the surveillance state. Hawkish national security and authoritarian police policies are in the modern GOP’s DNA.

This is going to require a majority progressive Democratic Party led by people like Congresswoman Donna Edwards who is now running for the Maryland Senate seat currently held by retiring Senator Barbara Mikulski.

Edwards has been consistent on these issues throughout her career in congress. For instance, in 2014 she voted against the USA Freedom Act, originally conceived as a reform measure which was later gutted by the Republicans in committee. She issued this statement at the time:

“After much deliberation I opposed the USA Freedom Act because I continue to believe it doesn’t strike the necessary balance between protecting our national security and protecting our 4th Amendment rights. Without question, national security issues are critically important, and I applaud all those who work at the Department of Defense, the National Security Agency, and others for their dedication to duty and professionalism. We must provide them with the means to gather the information necessary to keep America safe. However, we cannot allow the pursuit of that goal to infringe on the civil liberties that we, as Americans, hold sacred and fought so hard to defend.”

She will bring that same principled clarity to the Senate.

Yet again we have a clear difference between myself and my opponent in the Democratic primary in NJ-01. Today, Donald Norcross voted in support of the Protecting Cyber Networks Act, a bill that is a surveillance bill disguising itself as a cyber-security bill. This bill gives companies a significant expansion in their ability to monitor customers’ online activities. It allows them to share vaguely defined ‘cyber threat indicators,’ which then automatically go to the NSA. The NSA is then authorized broad law enforcement rights that could stretch beyond cyber-security.This chain of events is a slippery slope. I totally disagree with the structure of this bill. We must stand up for individual privacy. What we have in this bill is a wolf in sheep’s clothing, and if I were in Congress, I would have voted against it like other progressives such as Alan Grayson and Judy Chu.

The provisions of the Patriot Act which are set to expire in June should not be extended. We don’t know for sure if they will. The USA Freedom Act ultimately died in the Senate when the Democrats who were in the majority at the time added a few safeguards and then couldn’t overcome a filibuster. (Yes, the GOP ultimately filibustered the bill for being too weak …) The Republicans are now in charge and Tom Cotton is working overtime to give the NSA every last item on their wishlist. Perhaps we’ll get lucky and gridlock will work in favor of freedom once again. But I wouldn’t count on it.

There are simply not enough principled, progressive civil libertarians in congress to stop these abuses. We must elect more of them.

Please give what you can to stalwart civil libertarians like Donna Edwards and Alex Law.  And then, give your current representatives a call and tell them you want them to vote against any extension of the Patriot Act.