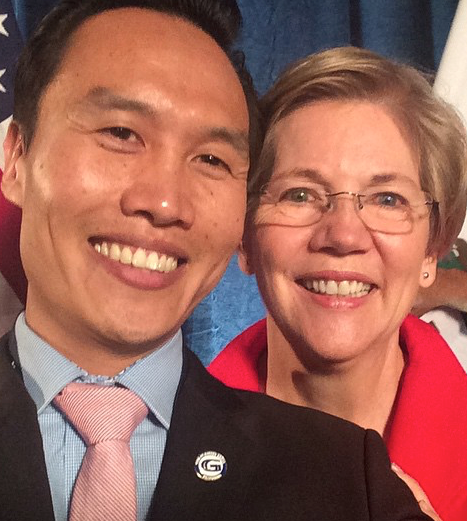 With Loretta Sanchez running for the U.S. Senate, Orange County’s 46th congressional district is will be an open seat in 2016. It’s a solidly blue district (D+9) and Obama won it with 59% in 2008 and with 61% in 2012. The district includes Santa Ana, Anaheim and Orange and the voters are overwhelmingly Hispanic-Americans and Asian-Americans. Although there may be as many as 10 Democrats interested in running,

Blue America has endorsed the most progressive of the lot, Garden Grove Mayor Bao Nguyen, an openly gay Vietnamese immigrant who arrived in this country when he was just three months old. I asked him when he made of the anti-immigrant mania sweeping the Republican presidential race. This is what he had to say.

As an American immigrant it disgusts me when I hear how Donald Trump, Jeb Bush, and the other Republican Presidential candidates have been talking about immigrants. It’s despicable, and disgraceful. Immigrants are the backbone of this country. They built this country and continue to add to it in so many ways. I was born in a refugee camp, and came to this country when I was three months old. We didn’t have much– let’s be honest, we were just poor. But we found a welcoming and supportive community of all nationalities and backgrounds, and with help and hard work, I was able to build a life here in California. But my story is no different from that of millions of immigrants who came to America in search of a better life– who knew they needed to work hard and play by the rules in order to get a fair shot at the American Dream. We need to celebrate the accomplishments of our immigrant neighbors, and we need to bring everyone out of the shadows, so they can be full participants in the American Dream.

But instead, Trump and the rest of the GOP Primary Clown car have started to bang the drums of fear and hate to alienate and divide our nation and it’s CITIZENS. As the discourse has gone more and more into the gutter, even the relatively ‘moderate’ GOP candidates have joined this chorus of hate. You may have heard the derogatory term “anchor babies” returning again, as it has in past debates about immigrations. Sadly, Republicans have resorted to an age old tactic to galvanize the extremist fringe of their party, by calling for stricter crackdowns on undocumented immigrants, primarily from Latin America, who they claim are trying to take advantage of America’s policy of birthright citizenship under the 14th amendment.

Recently the party favorite, Jeb Bush was criticized for using the term “anchor babies” during a conservative radio interview. Governor Jeb Bush has doubled down, telling reporters that he does not believe the term is offensive. “Nothing about what I’ve said should be viewed as derogatory towards immigrants at all,” he said Monday in McAllen, Texas. “I think we need to take a step back and chill out a little bit.”

I just want to restate, an “anchor baby” is a term to used to define an undocumented immigrant, coming to America with the intention having a baby specifically to take advantage of the Constitution– it IS a disgusting and derogatory term, period.

Bush clarified further, saying that he used the term “anchor babies” specifically to refer to fraud in a “specific targeted kind of case” involving mothers who travel to the U.S. only to win citizenship for their unborn children.

I know that Jeb is just trying to back track his xenophobic statement and not lose the elusive Latino demographic his party hopes to gain in the general election. Let me give some clear and direct advice, all Americans, no mater if their ancestors came from, Latin America, Western Europe, and yes Americans of Asian descent, find your divisive rhetoric abhorrent– no matter which group of people you are slinging mud at for your own political gains. This is exactly why we need to bring  more people to Washington who can tell the story of the very people that Jeb Bush and Donald Trump are trying to silence. I hope you will support me in my campaign to be that voice.

Bao, who is trilingual in English, Spanish and Vietnamese, earned a B.A. from the University of California, Irvine and while attending college, interned for the White House Initiative on Asian Americans and Pacific Islanders. He also holds a master’s degree in Indo-Tibetan Buddhist Studies from Naropa University in Boulder, Colorado, and has a certification in mediation from the Dispute Resolution Program of the Orange County Human Relations Commission. He will offer a unique and valuable perspective on Capitol Hill. When we asked him about the Iran deal, he told us he would vote for it. “From what I have seen this is the only option on the table that keeps Iran from developing a nuclear weapon and at the same time keeps American lives out of harms way. If this deal fails there are fewer non-military options since the international sanctions that were in place are no longer available to us. Frankly, I am disappointed with Republicans who only continue with their policy of opposing anything supported by Obama with no response to what they would do other than sending more Americans to war in the Middle East.”

Please consider helping him get his grassroots campaign into position to win this race. One thing I can assure you about Bao– he will never be a wishy-washy Democrat. He’s a fighter and, truth be told, reminds me in some ways of a  young Alan Grayson!