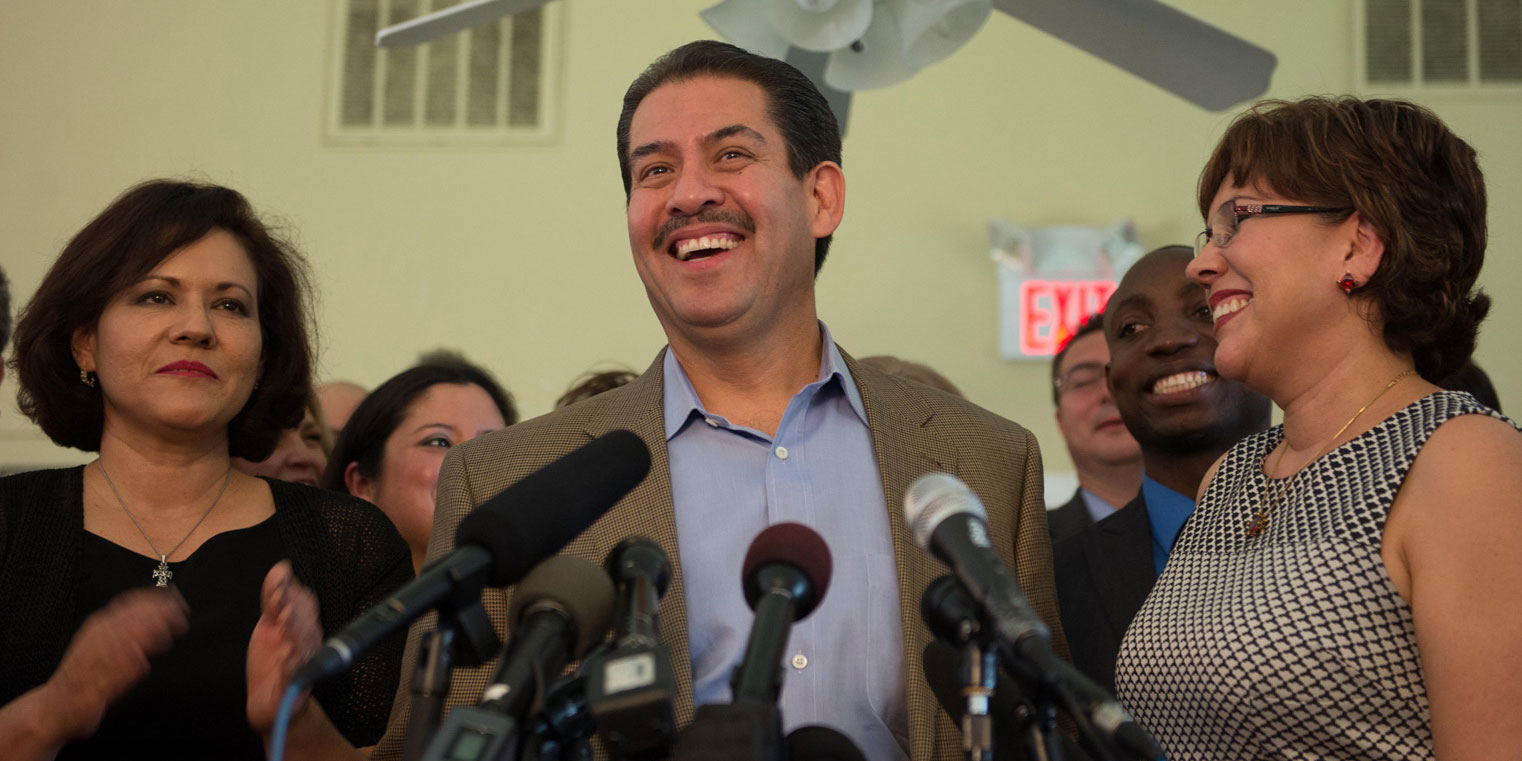 As we mentioned the other day, Adrian Garcia, is one of the bright lights in the 2016 congressional election cycle, a true public servant for over three decades, first as a police officer, then as a city councilman and later as sheriff of Harris County, third biggest sheriff’s department in the country. He has pursued a career in public service to help his community, which had no strong voice fighting for it– and doesn’t really have a strong voice fighting for it in Congress either.

He told us that as a young man, each summer he’d return from school to play basketball in the neighborhood, and his group would lose another friend, another school mate, another neighborhood kid– lose them to drug use, dropping out of school, joining a gang, etc. Adrian decided that he wanted to work to be a fighter for his community because everyone else had a voice and it seemed nobody was there to speak up fight for them.

Adrian is running for Congress because the people of TX-29 need an active, progressive, effective voice in Washington. Nobody can look at the statistics in the district objectively and think things are ok. 91% of the people in the district– the ship channel area, Aldina and north Houston, Cloverleaf, Galena Park, Pasadena, and the East End– don’t have a bachelor’s degree. Over 50% of students in the district have been dropping out of high school. Over 54% of people in the district don’t own a home. Over 24%– including over 33% of children– live in poverty. If you ask people who have lived in this district for the last 2 decades, they’ll tell you nothing has changed. The bad schools are still bad and the good schools are out of reach. College is nothing but a dream. Day to day life is about mere survival– economically and socially.

Adrian is working to build a movement within his community to create a new direction. He’s asking voters in TX-29 to take a hard look within in their communities– to see the failing schools, increased gun violence, crumbling infrastructure, and a stagnant economy– and to realize and embrace that they deserve better. He believes his district needs a change in tone and action. He understands the problems facing voters at their kitchen table because he lived them. He has decided that he cannot stand idly by while another generation of kids gets lost to the cycle of poverty and violence. As an elected official, he believes it is his job to be a proactive fighter that breaks that cycle– to build a movement block-by-block to show the communities that life can be better and that they can have representatives who take action to solve problems, not just take votes on issues.

Gene Green has been a right-of-center Democrat since 1992. The Energy Sector contributes primarily to Republicans and right-wing Democrats. Since 1992 he has taken $1,221,738 from the sector, more than any other Democrat in the House other than Majority Whip Steny Hoyer. In return, Green carries their water and protects their interests from his perch on the House Energy and Commerce Committee and as the Ranking Member of the Subcommittee on Environment and the Economy. He was an aggressive advocate for war against Iraq and lied on the House floor about Saddam Hussein being responsible for 9/11. He is widely considered one of the worst of the pro-pollution Democrats in Congress and consistently takes the side of special interests rather than consumers and working families.

Since he spent so many years in law enforcement, we asked Adrian to write a guest post about gun violence and solutions to that particular plague. Below is his guest post. If you’d like to help him replace Gene Green in Congress, please consider a contribution to his campaign at the Blue America ActBlue page.

I would like to thank Howie, and the whole Down With Tyranny/Blue America community, for giving me a platform to talk about a very important issue: common sense gun safety reform.

As a 30-year law enforcement veteran– first as a police officer and then as County Sheriff, I’ve come face to face with gun violence, and can tell you Harris County would be safer with common-sense gun safety legislation. When I started on the beat in 1980, police officers were facing .22 caliber pistols; today, they are facing semi and automatic weapons with armor piercing rounds.

One reason I am running for Congress because our country needs to take serious steps to address our problems with gun violence and our unregulated access to weapons of war. In our country, we lose 90 people a day to guns. In 2015, over 60 people were killed by guns in TX-29, including several children who were the victims of accidental gunshots. In Harris County, gun related incidents are now the second highest cause of accidental child deaths. Just in the last week, Harris County has lost two children to accidental shootings. In 2015, there were 582 fatal and non-fatal shootings in the Houston area– the highest number for any Texas city. An ABC-13 review of Houston Police Department press releases shows at least 87 of the 162 murders in the first six months of 2015 were gun-related. That number is likely higher as the cause of death is not always noted in press releases.

President Obama is right when he says “enough is enough.” We need to, and can, find reasonable and practical solutions to the proliferation of military-style assault weapons without impeding constitutionally-protected rights for law abiding citizens. As for armor-piercing “cop-killer” ammunition and similar items, I don’t want that type of weaponry on the streets of Harris County. Our laws should protect good law-abiding citizens and support law enforcement, not allow weapons to so easily fall into the hands of criminals or the mentally ill. When I am elected to Congress, I will be a loud and a strong ally with our next Democratic President in the fight to finish the President’s mission.

That means mandating background checks on everyone who buys a gun, regardless of where they buy it; closing legal loopholes in prosecuting gun related crimes; requiring states to provide all criminal and mental health records to the FBI to provide for more comprehensive background checks, and closing the terror gap to prevent individuals on the no-fly list from obtaining firearms. I will work with other members to ensure that we appropriate enough funds for the FBI and ATF to hire more officers to help speed up the background check process and engage in proper enforcement of violators.

All gun sellers need to be licensed to sell guns. Anyone who sells more than 2 guns in a year is considered a seller. Last, Congress should be encouraging new smart gun technology to improve gun safety, utilizing technologies such as fingerprint scanners and research new and innovative ways to prevent gun violence.

President Obama has been forced to seek Executive Action because Congress has failed. And my opponent, Congressman Gene Green, is part of the problem. The NRA helped elect Gene Green in 1992 and he has never forgotten them. During his career, he has:

It is no wonder the Congressman has a lifetime “A” rating from the NRA; he is their favorite Democrat in Congress. He is part of the reason President Obama has had to use Executive Action to protect our people. When House Democrats reclaim a majority, the NRA will still have Gene Green in their pocket to block progressive gun safety measures. He has been their insurance policy.

President Obama wrote in his New York Times Op-Ed that he would not campaign for any candidate– Democrat or Republican– who did not support common sense gun safety reform. We shouldn’t have to accept this in an 80% Obama district. There is no excuse– I am asking you to take the President’s stand a step further– help me defeat the NRA’s favorite Democrat.

Adrian Garcia is a former City Councilman and Harris County Sheriff. He is running for in the Democratic Primary for Texas’ 29th Congressional District. To learn more about Adrian’s campaign, go to http://www.adriangarcia.com . and to contribute to his campaign… this is the place.