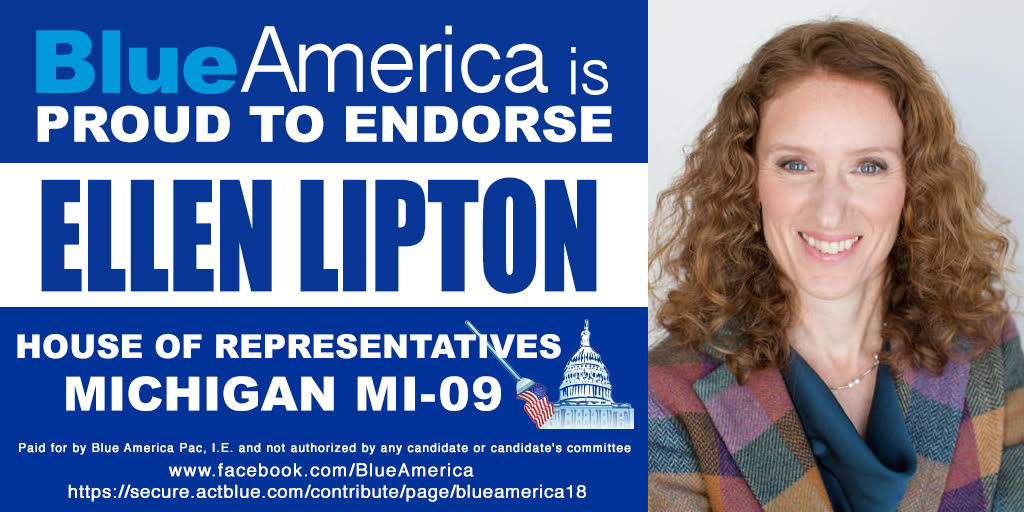 What most people know about Ellen Lipton, a candidate for the open congressional seat in the Oakland and Macomb county suburbs north of Detroit, is that she founded and was named president of the Michigan Promise Zone Association. The association supports free community college tuition, technical training and certification to Michigan students in selected communities across Michigan, a blueprint for free college tuition across America. Before that she was in the Michigan legislature, fighting for public education and therefore the bane of Betsy DeVos’ existence. But if education policy is one of her fields of expertise, infrastructure was one of the motivations that made her jump into the race. We don’t always think of potholes as issues in congressional races… but Ellen explains why it is in her district

“POTHELL!” was the big, bold headline splashed across a newspaper recently here in metro Detroit, and no word sums up Michigan’s infrastructure crisis more clearly. Under the headline was a picture of three drivers who’d been stranded on their way to work when they crossed an enormous pothole that had immediately destroyed their tires and rims upon impact. Welcome to pothole season in Michigan, when a daily commute often involves dangerous dodging and swerving to avoid potholes, then dodging and swerving to avoid accidents with other vehicles.  It’s a public safety nightmare.

Trump recently unveiled his infrastructure proposal, and it falls far, far short of what’s needed in Michigan to even begin to solve our infrastructure crisis. Under his plan, states and localities would have to find their own, new sources of revenue to spend on infrastructure to even qualify for federal help. After decades of state disinvestment in infrastructure in MI, Trump’s plan would have little to no impact here, since our local units of government have already been revenue-starved for years and are highly unlikely to be able to come up with new state spending sources.

Michigan can’t wait for President Trump to get his act together and propose a plan that would actually work for our state. Here are just a few examples of how our infrastructure crisis is negatively impacting our communities every single day:

The problems I’ve just described above barely scratch the surface of what our state’s infrastructure crisis entails. Cleary, President Trump’s so-called plan won’t even begin to get the job done when it comes to rebuilding my home state and making it a safe and healthy place for our communities.

What’s needed now more than ever is a bold vision for rebuilding our infrastructure, centered on the human side of the issue, and focused on putting people back to work and enhancing peoples’ quality of life where they work and where they live. Such a bold vision would invest our resources in people to produce millions of family-sustaining jobs, raise living standards, reduce inequality, strengthen education, reduce poverty and create a clean, healthy environment.

It would also mandate a direct public investment in roads, bridges and other public works, as opposed to providing “corporate giveaways” to spur private-sector investment. This direct investment should come in the form of a federal jobs program, through which our country would invest in human capital by putting people back to work rebuilding our roads and bridges, water and sewer systems, schools, airports and veterans’ hospitals, and linking our communities with high-speed internet access.

This kind of federal infrastructure program could create millions of jobs immediately, as well as introduce real-world job training for so many young people who are looking to begin careers in the skilled trades. An initiative like this one place great emphasis on jobs that pay a living wage, ensure workplace safety and guarantee racial and gender equality in the workplace. These goals could be achieved by raising benchmarks for prevailing wages in every corner of the country, requiring local hiring to accurately reflect and represent the diversity of the community’s workforce, include robust “Buy American” requirements and prioritize the hiring of veterans.

The path to American greatness lies in significant investment in our greatest resource: our people.  A federal jobs program based on rebuilding our country would be proof that America’s complex infrastructure challenges can be met by following the simple principle that public money should go toward the public good.

MI-09 is a reliable Democratic district, which Sandy Levin, who has represented it for three-and-a-half decades, is leaving. His son Andy would like to take over. There are 2 other middle-of-the-road men running as well… and Ellen, the progressive game changer in the race.

Ellen is part of the progressive grassroots energy that is sweeping the country and she’s the kind of leader who won’t be satisfied sitting on the backbench taking orders from the party’s sclerotic, calcified leadership. Pelosi’s, Hoyer’s and their team’s days are numbered. The congressional Democrats desperately need seasoned, bold leaders like Ellen Lipton to help the party snap out of it before it’s too late. Please consider contributing to her campaign here.