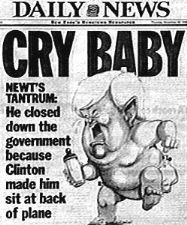 This morning's Sunday Talking Head line-up is up for the reading. Timmeh needs to hire himself a better booking person — because if Newt Gingrich, David Brooks and Tom Friedman is the best NBC could muster this morning…well, it's just sad.

And if Newt Gingrich is the Republican party's best and brightest brain who has the great ideas for making it all better and turning things around from today's failure of a scandal-ridden, ethics-challenged, public mistrusting loser Republican party to shiny and better than before GOP newness?

The good news is that Rep.-elect Joe Sestak of PA-07 (otherwise known as the Blue America candidate who kicked scandal-plagued Republican Curt Weldon's behind) will be on This Week. If you haven't been introduced to Joe Sestak as yet, take a peek at the chat that Howie Klein did with him for Blue America during the campaign — Sestak is sharp, knows his stuff, and doesn't mince his words. Boo-yah.

Is it January yet?