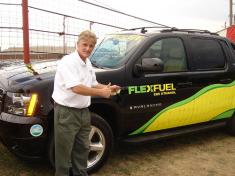 Last year Indiana Democrats had a startling election year. They replaced 3 of the most reactionary rubber stamp Republicans with 3 Democrats. Unfortunately — although quite predictably — all 3 Democrats, Brad Ellsworth, Baron Hill and Joe Donnelly– turned out to be nearly as bad as the Republicans they ousted. And on substantive matters they tend to vote very much like their Republicans predecessors — for things like FISA and Bush’s war agenda, for example. Jane, John and I saw it coming a mile away and refrained from endorsing any of these three clowns.

We did see a Democrat we liked in Indiana, a very progressive, net-savvy Methodist minister named Barry Welsh. We didn’t officially endorse him because we thought he’d have no shot against far right bigwig Mike Pence. But Barry waged a low-dough, grassroots campaign and wound up with 40% of the vote, far more than anyone thought possible. We think he can do much better in 2008 and we invited him on for a Blue America session over at Firedoglake today at 11am, Pacific Time (2pm, EDT). Come over and meet a remarkable candidate who deserves all the support we can muster. If you’re feeling flush at all, keep in mind that even $5 and $10 donations, helped Blue America raise over $545,000 last year. We helped elect a dozen new members of Congress.

Let’s try to add Barry Welsh to that number in the next Congress, the one that will have to actually end Bush’s disastrous war and start cleaning up his catastrophic policies.

Jane Hamsher will be hosting the discussion at FireDogLake…go over and say hi.