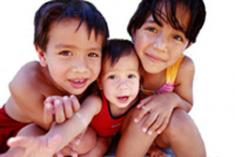 We all know that the DCCC is pressuring the Stepford Republicans into switching enough votes to override Bush’s veto against SCHIP by using commercials and telephone calls. They are doing a good job on that front. You may not know that five Bush Dog Democrats are sticking with BushCo. and voting against their own party and against SCHIP.

At Blue America, we’re not going to stand around and do nothing and let these Bush Dogs fall on the wrong side of such a moral issue. Michelle James, a full-time working mother who can’t afford health care for her son—joins Blue America and has recorded several phone messages to speak out against these Democrats that are working to undermine our children. Here’s one of the calls that we’ve financed and is live right now…

As Jane says: “Some Things are Not Negotiable”

While we believe that there should be a big tent within the Democratic party, there are some issues that are not negotiable, and making sure kids have health care is one of them.

The calls are being paid for by the Blue America PAC and BlogPac any contribution you might like to make to support this effort would be greatly appreciated.

Howie and Digby have more.

Open Left has a nice rundown and is showing some Blue America love: The Ultimate Bush Dogs

Please use our ActBlue page to donate… We need your help!