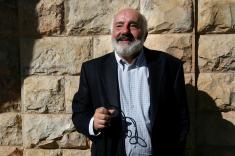 Our Blue America guest today is Rabbi Dennis Shulman from northern New Jersey. He joins us at 2pm (EDT) over at Firedoglake to answer questions for a couple of hours. He’s a really remarkable guy. I got him to talk a little about his opponent, New Jersey’s most reactionary congressman, Scott Garrett. “Garrett is is a social conservative who has an 87% voting record with George Bush. The 13% is more conservative than Bush… on issues of immigration, on issues of voting rights authorization, which was really out of step with anything approaching the feelings of this district. He advocates “intelligent design” in the public schools. He’s 100% against gun control, 100% against stem cell research, 100% against a woman’s right to choose, 100% against anything involving gay issues… but for wiretapping, for retroactive immunity for phone executives, etc. And he’s been able to do this because he’s been able to keep a low profile. Most people in this district would be appalled to learn how he has misrepresented us in the Congress.”

Rabbi Shulman has an extraordinary life story which partially centers around a “can do” personality of a blind person. And aside from being a blind rabbi, he is also a blind drummer. He studied drumming with Joe La Barbera, one of the world’s greatest. When I prodded him about who his favorite all-time drummer is he went back and forth between Max Roach and Gene Krupa, ultimately settling on Krupa. And his favorite song?

He asked me to find the version with Ella Fitzgerald performing in Japan. This is the closest I came:

Elections attorney Marc Elias on Democracy in Peril tonight: “If we just go on with our lives and act like democracy is not at stake, it's not in peril, that's where the other side will win.” pic.twitter.com/WsXaUPFzNM

Your reminder that #AB1400 (single payer healthcare) is up for a vote in less than a week. Click the link in my bio to phone bank TOMORROW @ 6PM PST pic.twitter.com/qd91HzL050