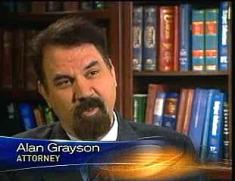 Alan Grayson is an attorney who has been taking on war profiteers (like Custer Battles, Halliburton and KBR). Now he’s running for Congress in Orlando against reactionary rubber stamp Ric Keller and he’s the first Blue America candidate we’ve endorsed since November, our debut recommendation for 2008. As always our Blue America page is open… 24-7.

Yesterday Alan put together a special little video ad for C&L. Take a look and if you think this is a guy you want to know more about, he’ll be blogging live today at Firedoglake, 11am (PT)/2pm in Florida. This is a pretty unique guy– and if he ever gets subpoena power, the worst nightmare the right wing could ever imagine.

John Amato: This is someone we can all get behind. His stance and incredible success against the war profiteers in Iraq is remarkable.

If they want to investigate then investigate how Texas is treating migrants seeking #LegalMigration. They can't keep shredding human dignity by putting them on buses to different states to prove a point. #FreshResists

To understand MAGAs and the Republican Party, you must pay attention to how they vote in Congress, NOT what they say on Rupert Murdoch’s propoganda channel, Fox News. Republicans are AGAINST child tax credits, affordable child care, and universal Pre-K. GOP simply doesn't care. pic.twitter.com/Hc0C8tKgv6