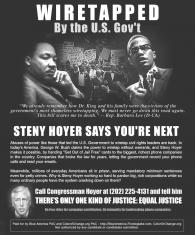 Since we started our campaign to hold Steny Hoyer and other members of Congress accountable for conspiring with Bush against the Constitution, almost 5,000 patriotic Americans– regardless of political party– have donated to our drive. You’ve seen our thermometer rising and now it’s approaching $300,000. Our first batch of advertising, including a full page ad in the Washington Post goes out next week.

None of the progressives who voted against Hoyer’s disgraceful capitulation to Bush today will go on record advocating for a new Majority Leader and many of the candidates are too frightened to do so. There’s even a cousinly split. The two House Udalls, Tom from New Mexico (the progressive one) and Mark from Colorado (the more establishment one), are each running for the U.S. Senate against rabidly right-wing Republicans. Mark (CO) voted with Hoyer, Bush, the Blue Dogs and the GOP to trash the Constitution. Keep it in mind when the DSCC send you an e-mail begging for money. The better Udall, Tom (NM) voted with us and had this to say to New Mexico residents:

The FISA bill we considered today would compromise the constitutionally guaranteed rights that make America a beacon of hope around the world. Today’s vote was not easy. I stood up to leaders of my own party and voted against this bill, because I took an oath to defend Americans and That duty is most important when it is most difficult. We can protect our nation while upholding our values, but unfortunately, this bill falls short.

That sounds like real change. Mark? Not so much.