Blue America gets ready for Senate 08! 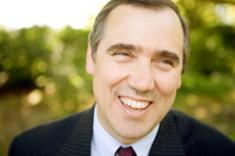 Yesterday we got a little peek at some new polling out of Oregon and we were relieved to see that since early August, Jeff Merkley‘s numbers have grown by 5 points while Gordon Smith’s have dropped by 6! This is especially encouraging because Smith, desperate to rewrite history in such a way that makes him anything but the craven Bush rubber stamp he has always been, has been running nonstop deceptive attack ads against Jeff (shown above) all month.

A week from tomorrow Blue America launches another candidates’ competition, but this time for our Senate candidates, like Jeff. The House contest was a huge success. Not only did 1,900 donors contribute $43,000 to our 9 candidates but at the last minute DCCC chair Chris Van Hollen took up the Blue America challenge and matched our $5,000 for the winner. When we announced that Annette Taddeo of Miami-Dade had won, two other DCCC higher-ups, Rahm Emanuel and Debbie Wasserman Schultz, wrote her hefty checks and vowed to help her replace reactionary wingnut Ileana Ros-Lehtinen. And yesterday we got advance word that the DCCC had decided to move her– as well as two other Blue America candidates, Sam Bennett (PA-15) and Alan Grayson (FL-08)– into their Red to Blue program, which opens the financial doors that lead to big institutional donors, wealthy Democrats and members of Congress. At the same time, the DCCC brought two more of our candidates, Russ Warner (CA-26) and Larry Joe Doherty (TX-10), into their fold as Emerging Races candidates, normally a preliminary step before Red to Blue. This is a great big acknowledgment from Inside the Beltway that these grassroots progressives look like potential winners in November. If you get that lovin’ feeling… our Blue America ActBlue page is open 24/7.