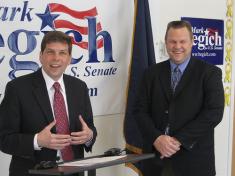 In 2006 one of the victories Blue America was most proud of was our early and unstinting support for John Tester. Chuck Schumer and the DC Insiders were ruthless in their attempts to ram a corporate hack down Montana Democrats throats. We helped beat that back and then went on to help Tester beat corrupt Republican rubber stamp Conrad Burns in November. Senator Tester saw our Blue America Senate contest and decided to chime in on behalf of Alaska’s Mark Begich in this letter he sent us:

I’m a huge supporter of Mark Begich and I think you should be too. He is one of the best and brightest candidates we have running for office this campaign season. In May, Mark invited me up to Alaska to show me around the Last Frontier. It was an incredible opportunity to see and learn more about Alaska and the issues of the state. Together, Mark and I held veterans listening sessions in Fairbanks, Anchorage, and Wasilla where we had very insightful and interesting conversations with the veterans about the challenges they are facing today.

I’ve been impressed with Mark’s drive to public service since I first met him, and have found him to be one of the more remarkable political figures I’ve ever met. And in my visit with Mark this spring, his words and actions again impressed upon me how important it is that he be elected to the US Senate this November.

His style of producing solutions to tough problems as Mayor of Anchorage will be well suited to overcoming obstacles in the Senate. I look forward to having the perspective of another Democrat from a Western, rural state. And Alaska deserves a Senator who’s putting Alaska families first. I’m supporting Mark because he’s fighting for lower energy prices, affordable health care, and the support our men and women in uniform deserve. It’s about time Alaska had representation Alaskans could be proud of. And Mark’s drive for full disclosure as a candidate represents a great model for the Senate itself.

There are a lot of similarities between my race in Montana in 2006 and Mark’s race in Alaska today. Like me, Mark is running against a powerful, long-time Republican incumbent tainted by clouds of corruption. Mark’s in a close race and it’s going to stay tight through election day. Another big similarity is that just as I was carried to victory with the support of the Netroots, Mark needs help from committed activists across the country to win. So please, take a moment to make a contribution to Mark Begich’s campaign and help ensure that he and I are working together next January in Washington.

I have some exciting news. I am taking a leave of absence from Fordham Law School to work for the great New York State Attorney General @TishJames as a Special Advisor and Senior Counsel for Economic Justice. I’m proud to join such an extraordinary office.

Erm, the Trump White House literally revoked @Acosta's WH press pass and then put out a deceptively-edited video to try and smear him.

You can literally make up whatever you want on the (far) right and get away with it. Get 1000s of likes, in fact. What a fact-free world... pic.twitter.com/uStmvMWzXh