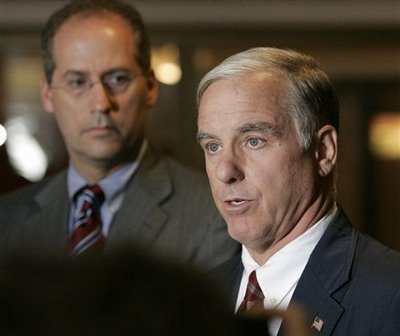 [Editor’s note: Crooks and Liars is pleased to host a chat with Dan Gelber, the only progressive running for Florida’s soon-to-be-open Senate seat. Please join us on Monday at noon PST, where you can ask Dan questions of your own.]

With all the ugliness and sleaze surrounding the appointments of new senators in Illinois and New York, and, to a somewhat lesser extent, Delaware and Colorado, it’s refreshing to see Florida cranking up for a good old fashioned election– you know, where voters decide who the senator should be. In the afterglow of McCain’s loss in the Sunshine State (plus the loss of two GOP congressional incumbents, a state legislature that is turning less and less red every year, and some sketchy-looking polls) conservative Republican incumbent Mel Martinez decided to retire in 2010.

The first choices among party Insiders — Jeb Bush for Repugs and Alex Sink for Democrats — have passed on the opportunity. That leaves the race wide open for both party primaries. This week the hopes of Florida progressives was answered when state Senator Dan Gelber tossed his hat into the ring.

Dan isn’t well-known outside of Florida but he is far better known in his state than most local legislators. That’s because until November– when he was elected to the state Senate– he was the Democratic Minority Leader of the state House. And a very outspoken one at that. Before that he worked as a federal prosecutor, mostly on corruption and civil rights cases. He worked in the U.S. Senate as the staff director of the Senate’s Permanent Subcommittee on Investigations under Sam Nunn (D-GA).

The only other Democrat who has declared is Rep. Kendrick Meek, although another South Florida moderate, Ron Klein, is also thinking about running, as is conservative Blue Dog, Allen Boyd. The Republicans lining up to run are even more conservative then Boyd– Bill McCollum, Marco Rubio, Allan Bense, Vern Buchanan and Connie Mack.

The other day I spoke with Dan about how he sees the race shaping up and about where he stands on some of the issues that are important to voters. I asked him about comprehensive health care reform and wanted to know how he felt about Jim Clyburn’s statement on Sunday that the House and Senate couldn’t sync up their timetables meaning there wouldn’t be any comprehensive reform in 2009. He said he didn’t think it was asking too much to have members of Congress give up their own taxpayer-subsidized health care if they can’t get on the stick with this.

If elected leaders felt the same challenges that their constituents felt, obviously they might be a little bit more sympathetic. It’s symbolic but I think it would help elected officials to understand what’s going on with their constituents. In Florida the health care issue is more pronounced than virtually any other state. We have 3.8 million uninsured people in the state including 800,000 children. We’re a state of 18 million so about one in 5 people don’t have health insurance. Many of these are people who are working and simply can’t find affordable or available health care… I tried to put it in Florida’s constitution a requirement that every child have health care.

Dan’s pragmatic attitude towards governance has won him tremendous respect on both sides of the aisle, way beyond ideology. You get the feeling why just by engaging him on any of the contentious issues that plague the country. He isn’t eager to pigeonhole himself into an ideological boxes that forces someone to check off where you are on issues regardless of whether or not the approach makes sense at the moment.

The kind of government I’m interested in advancing is the kind of government that is more thoughtful and not necessarily as politically expedient. The way in which then-Senator Obama ran his campaign had a lot to do with why I supported him early on as a super-delegate. In Florida we have these incredible challenges: one of the highest percentage of uninsured of almost any state, almost the worst high school graduation rate… We have to progress past these simple draconian policies that have contributed to this.

For example, I don’t believe the best way to improve the economy is simply by handing out tax breaks to businesses. I think, in my heart, the best way to do it is by investing in your work force. In my community we have a very good example. Miami Dade Community College is the largest community college in America– 180,000 students have of whom are the first person in their family to go on to higher education. And to me that doesn’t simply transform a family, but a whole community and an economy. Because of our budget cuts this year we have been denying those young people opportunities, people just starting out who are looking for more opportunities.

I think tax cuts are great if they are across the board and go to the middle class which tends to spend them. I don’t think they’re so great under the notion of “trickle down” economics which I think is a failed, a proven failed, policy. Obviously the tax cuts to the wealthiest and to businesses from the Bush administration hasn’t done anything for our economy. On the other hand, some of things being talked about in the Obama Administration are making a good level of sense. Decreasing payrolls taxes for example– so people get a little bit more in their paychecks every month. I think they’ll tend to spend it. The psychology of that is not a lump some you might save but something you might spend then and there. I’m heartened by the idea that there’s that kind of thoughtfulness going into the Stimulus Package.

Thoughtfulness in anything seems to hearten Dan. It’s the kind of guy he is. Take a look at the clip below and you’ll get some insight into who Dan is as a public servant:

And… we’ve opened an Act Blue page for Dan’s campaign. Since this is his first day, anyone who donates at least $25 today gets a free CD (a good one; I promise).

[Cross-posted at Down With Tyranny.]