Keith Olbermann discussed how destructive Blanche Lincoln has been over her non-support of the public option as she sits on the Senate Finance Committee even though Arkansas residents favor the public option by a wide margin.

Olbermann: …others who act like Republicans who still call themselves Democrats — Senator Blanche Lincoln for instance telling Roll Call that she’s all for the public option so long as it is not a pubic option, ostensibly so she can sell it back home in Arkansas. Her quotes: I’m not supportive of a government run and government supported public option. That would be the definition of a public option. She adds,

Last month 55% of those people in her state surveyed by Research 2000 were in favor of a public option. The public option is there to create choice and bring down the price of health care for Americans. What is she talking about?

Blue America was the first group to target Lincoln back in June with an ad campaign, and now, as the health-care reform debate winds down, we’re buying another round of ads to run in her state for the next two weeks that will inform her constituents once again that she is not working for the people who elected her, but for the health industrial complex that sends funds to her campaign. It’s not a coincidence that her poll numbers have dropped big time since we started our ad campaign — and as time has gone by, she finally became more outspoken about her non-support for the public option. It wasn’t a surprise that she tried to stay out of the spotlight as much as possible so that she could remain invisible until she cast her vote, but that was never going to happen. 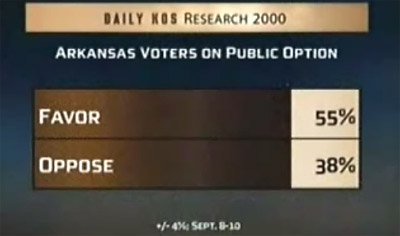