Roxanne Conlin– Is She The Democrat Most Likely To Paint A Red Seat Blue In 2010? 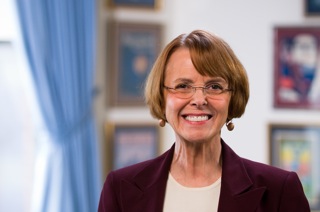 The ideologically-based media and the corporately owned media have been diligent in painting a decidedly one-sided anti-Democratic picture going into the November Midterm elections. They hope the conventional wisdom that they’ve created– that this is a wave year for Republicans– will become a self-fulfilling prophesy. This isn’t borne out by the facts– Republicans are as untrusted and unpopular as ever, for example, and as the economy recovers from Bush-Republican financial and economic policies (and deprecations), Democrats look more and more attractive to ordinary Americans. What is clear, on the other hand, is that 2010 will be a bad year for incumbents, particularly conservative ones.

Last weekend in Utah, ultra-conservative Republican Senator Robert Bennett saw his political career come to a screeching halt at the hands of deranged teabaggers. At the same time, one of the most conservative Democrats in Congress, Blue Dog Jim Matheson, was denied the Democratic Party endorsement– with corporate shill Steny Hoyer in the room pleading with delegates to vote for him– by an openly lesbian progressive Democrat, Claudia Wright. Mormon-dominated Utah hasn’t exactly been fertile soil for progressive values or the Democratic Party, but progressives and Democrats stand to make gains all over the country. And the Blue America guest today, Roxanne Conlin of Iowa, may well be the best shot the Democrats have of turning a red Senate seat blue.

She’s also the best shot Iowa Democrats have of taking that seat back from the conservatives in living memory. She’s a trial attorney whose life’s work has been standing up for ordinary American families against predatory corporations, the kinds of predatory corporations that have financed Chuck Grassley’s political career. Conservative barnacle Grassley was first elected to political office in 1958. How old were you then? He’s been gulping from the public trough– with no interruption– for 52 years. Even if the media doesn’t, wily old Grassley does understand that 2010 is shaping up to be an anti-incumbent year, not an anti-Democratic year. And this will be the first time Grassley has ever faced a strong Democratic opponent and the first time he’s run with a registration disadvantage. Iowa Democrats overtook Republicans in 2006, increased their share of voters substantially in 2008 and go into 2010 with around 100,000 more registered voters than Republicans.

Grassley, who may be personally liked by– or at least familiar to– most Iowa voters, is increasingly seen as kind of senile and bizarre, making inappropriate comments, about “pulling the plug on Grandma” and crazy stuff like that, as though he had Tourette’s syndrome. One of K Street’s best friends and widely viewed as a senator whose vote is always up for sale to the highest paying corporate interest, Grassley actually failed to keep pace with Roxanne’s grassroots fundraising in the first quarter! The 28 point spread between Grassley and Roxanne in January has shrunk to a 9 point advantage for the 30 year incumbent.

So far all this momentum for Roxanne has come with no help from Washington, no TV ads, nothing but grassroots, on-the-ground, old style retail campaigning. She’s visited all 99 of Iowa’s counties, even the ones that vote for Steve King! She’s already beating Grassley among women voters. And what does she talk about? Real issues with a real impact on people’s lives. And that’s bad news for Grassley. He may not remember, but he was the one who stuck a little provision into Bush’s Medicare Part D giveaway for Grassley’s Big Pharma campaign contributors that guaranteed that the federal government could not negotiate for fair prices for senior citizens. This is one of Roxanne’s favorite points. She told me that when someone buys Zocor (20mg) through the VA (where the government does negotiate, they pay $127.44 annually. Vets were lucky Grassley didn’t do to them what he did to seniors. Seniors buying the same Zocor through Medicare Part D pay $1,485.96, thanks entirely to Chuck Grassley and the other conservative corporate shills in the Senate. If you buy your Protonix (40mg) through the VA, the government gets you a nice deal– $214.53/year. The Chuck Grassley price is a stunning $1,148.40. No wonder the pharmaceutical industry loves him. He’s responsible for transferring billions of our dollars into their coffers. He gets a cut, too; they’ve given him $549,180 over the years.

Roxanne looks forward to getting into the Senate and changing this– as well as the ban on drug importation, another reason the Big Drug companies love Grassley so very, very dearly. She’s also eager to debate Grassley on his ardent backing for corporations that ship American jobs overseas. He has a long and sordid voting record she wants to talk with him about. In 2005, for example, he voted against an amendment (along with every Republican and a few conservative corporate Dems) that would repeal tax incentives for domestic companies that move their manufacturing plants to offshore locations and use the resulting revenue to reduce the federal deficit and debt by $3.2 billion from 2006 to 2010. The year before, he voted against prohibiting American tax dollars from being used to ship jobs outside the country. The amendment Grassley voted against would have: limited the ability of civilian agencies to award contracts to companies that would use offshore workers, prohibited the privatization of jobs when contractors would take the work overseas, and require states to certify that they will not use federal funds for services performed outside the United States, eliminated tax advantages for companies that move factories overseas to make goods that are shipped back to the U.S. market, and prohibited companies from deferring taxes on income earned from these “runaway” manufacturing plants. Again, Grassley and every single Republican voted against it– joined by 4 DLC corporate freaks, John Breaux, Ben Nelson, Zell Miller and Max Baucus. 2004 was also the year Grassley voted against an amendment that would have struck $39 billion in tax breaks on overseas income. The amendment would have provided for an immediate 9% tax deduction for domestic manufacturers. And in 2003 there were three more votes along the same lines: helping wreck the middle class by rewarding corporations for shipping American jobs overseas. If Roxanne can make this case stick– get Iowa voters to focus on Grassley’s voting record– he’s toast. Let’s help her get the message out.