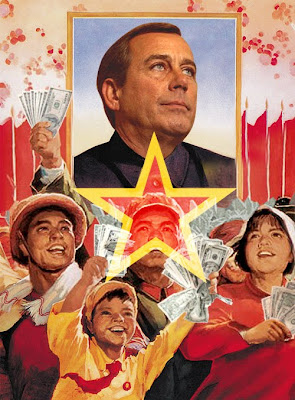 It probably won’t surprise you to find out that the DCCC is basically using all their resources to save the seats of anti-Choice, antigay, anti-healthcare, pro-Big Business Blue Dogs and doing nothing whatsoever to help progressive challengers take on the worst of the reactionary Republicans who are such a threat to our country. Here at Blue America we’re working hard to give Justin Coussoule a fighting chance to beat the orange golfer who would be Speaker, John Boehner. But we’ve run into a little hitch. Actually a big one– using the U.S. Chamber of Commerce as a vehicle, China, Russia and several other foreign powers with a vested interest in seeing Boehner win the Speaker’s chair have funneled millions of dollars into the midterm elections. Howie wrote extensively about this yesterday.

Because of Blue America donors we’ve been able to help put Justin on the map with our billboard campaign and a modest TV ad campaign in Butler County. Now we’re ready to knock Boehner’s block off. Can you help? Blue America’s ad team are putting together what we think will be the blow that will hit Boehner so hard that just could actually win this race!

There are very clear differences between Boehner and Justin, differences that voters need to hear about. Boehner adamantly opposes a woman’s right of Choice and would like to see Roe v Wade overturned. Justin is just as adamant that the government has no business interfering with this kind of difficult personal decision and that it’s a matter for a woman, her family and her physician to work out. Boehner opposes equality for the LGBT community. More in tune with contemporary feelings on the subject, Justin feels no Americans should be discriminated against under the law. Boehner vociferously opposed the whole concept of Wall Street reform while Justin feels that a legitimate and necessary role of government is to protect consumers and workers from powerful predatory forces. Boehner has been a tireless champion of trade legislation– from NAFTA and CAFTA to the WTO/GATT and most favored status for China– that has shipped millions of American jobs to low wage countries. Justin is campaigning for incentives to create good paying jobs in America. I  have a feeling that based on the above, we could tell you an issue and you would be able to guess which side Boehner is on and which side Justin is on.

The Chinese Communists are desperate to make John Boehner Speaker of the House. We want to make sure they fail. On this page you’ll find a slot to donate to Justin’s campaign and a slot to donate to the PAC for our ad buy. Legally we can’t coordinate our buy with Justin’s campaign and the money that goes for his campaign can’t be used for the ad buy. The best scenario is to split whatever you feel like contributing between the two efforts.

digby, Howie, and John and the Blue America team