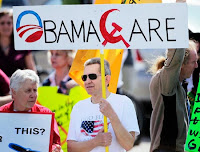 This is Healthcare Hypocrites Month for DWT. Blue America is working with our allies at Daily Kos, Americans United For America PAC and Americans For Change to expose Republicans who voted to repeal healthcare for their constituents while getting government-funded healthcare for themselves. We have ads up and running in Wisconsin, New Hampshire, Florida and New Jersey so far. Some of the Republicans are wily. Sandy Adams, for example, claims that she turned down the congressional package. And she did. That’s because she’s already getting government subsidized healthcare because her husband is a circuit court judge and signed up on his taxpayer-funded benefits package. That’s more than hypocritical; it’s dishonest and an affront to the people in Seminole, Orange, Brevard and Volusia counties who elected her. You can hear the ad running on WIXC (Brevard’s Newstalk 1060) here:

But yesterday Marin Cogin reported on an ironic twist to this sordid story of right-wing heartlessness, greed and hypocrisy. Some of the Republicans who did turn down the congressional healthcare packages, in the hopes of not looking like complete hypocrites, are now sorry.

[T]alk to some of the 16 freshman lawmakers who have declined their government health benefits, and you’ll hear… about tough out-of-pocket expenses, pre-existing conditions and support for health reforms that would help those who struggle with their coverage. As they venture into the free market for health insurance, these lawmakers– many of whom swept into office fueled by tea party anger over the health care law– are facing monthly premiums of $1,200 and fears of double-digit rate hikes.

The experience has caused some of them to think harder about the “replace” part of the “repeal and replace” mantra the GOP has adopted regarding the health care law.

“I have a niece who has pre-existing conditions, and I worry about her if she was ever to lose her job,” said Florida Rep. Richard Nugent, one of the freshman lawmakers who declined federal health insurance benefits.

“I can simply, honestly say that this is going to impact my wife and I to a fairly serious degree, like it would any average American out there,” said first-time Rep. Joe Walsh of Illinois.

Walsh’s wife has a pre-existing condition and will need a procedure in the coming months, but because he declined federal benefits, they’re paying for it out of pocket. Meanwhile, Walsh is contributing to a health savings account to cover his expenses.

“It’s a cost we will feel, a cost I will have to pick up. I won’t turn down benefits because I have something to fall back on or because I’m independently wealthy,” he said.

Maryland Rep. Andy Harris caused an uproar during freshman orientation when he demanded to know how long it would take for his federal health insurance policy to kick in. Since then, the question of whether lawmakers who ran against the health law should accept their own government benefits has become a favorite game of partisan ping-pong in Washington. Democrats are demanding that the lawmakers who voted to deny reform benefits to the American public turn down their own federal employee health insurance, and Republicans have argued that accepting benefits from the government is not inconsistent with GOP support for employer-based coverage.

Roughly 85 percent of federal employees get insurance benefits from the Federal Employees Health Benefits program, according to a report by the Congressional Research Service. Among the freshman Republican class, the number opting out is only slightly higher: About 18 percent are on record as having denied insurance coverage. Most — including Reps. Kristi Noem of South Dakota, Michael Grimm of New York and Renee Ellmers of North Carolina — are accepting the benefit plans provided to federal employees. Ellmers took some heat from local North Carolina media for telling a radio show that “it costs a lot of money to be here in Congress” as a way of justifying her health coverage.
The current FEHB program allows policyholders to pick and choose from a variety of coverage options. In that way, their experience with insurance policies is akin to the state-based insurance exchanges that will allow citizens to shop around for their policies beginning in 2014.

The freshman members who declined insurance have had to find other ways to cover their health needs.

Louisiana Rep. Jeff Landry is enrolled in an individual health savings account. New York Rep. Nan Hayworth, an ophthalmologist, gets employer-based coverage through her husband, who is a doctor. Rep. Cory Gardner of Colorado purchases his plan through an insurer in his home state. 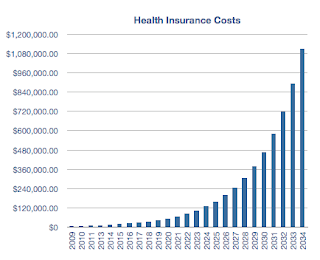 Nugent, a former sheriff, doesn’t receive federal employee benefits, choosing instead to purchase a Blue Cross Blue Shield plan for retired county employees, which he said costs about $1,200 a month for his family. Still, he said, his niece’s experience has contributed to his support for ending coverage bans on pre-existing conditions. “One of the key components with the ‘replace’ [bill] was to make sure we take care of people who have pre-existing conditions,” he said.

As the owner of an automobile dealership with about 150 employees, Rep. Scott Rigell, a freshman from Virginia, said he’s had firsthand experience with the rising costs of insurance for business owners.

“I’ve never disputed that true reform is needed,” Rigell said. “Every year we brace ourselves for the renewal — is it going to be 18 percent or 25 percent or 30 percent [more expensive]? It’s going to well exceed first the overall level of inflation and also going to well exceed any ability on our part to raise our prices by anything approaching that. So it is terribly burdensome,” he added.

“Right now, there are 14 some million Americans and growing who are out there in the individual market who have a much tougher battle,” said Walsh, who has an individual health savings account.

“I suppose you could say that I’m dealing with this as any average American would. This will financially impact us,” said Walsh.

Now that Republicans have made good on their pledge to repeal the health care law, some of them are already feeling pressure to offer policy solutions that would address the problems in the insurance market– ones that the new members, having declined benefits, should have some experience with.

One new Republican House member, Rep. Sean Duffy of Wisconsin, recently told a local TV program that he needed a commitment from GOP leaders that they’d offer their own health care proposals before he voted to repeal the Democrats’ bill.

“My position during the campaign and today is, let’s reform the reform or repeal and replace. And so, I wasn’t going vote for it,” Duffy said. “But I went and spoke to the leadership, and I got a commitment that we were going to bring forward our ideas on this replacement bill.”

Regardless of lawmakers’ reasons for accepting or declining federal health benefits, Gardner said the decision shouldn’t be used for political potshots.

“Our decision was not based on efforts by the Democrats to try to say that health insurance benefits and the health care bill are one and the same,” said Gardner. “Those complaints are completely misdirected. That’s apples and oranges. Our choice was simply made on what works for our family.”

If you’d like to contribute to our Healthcare Hypocites Campaign… here’s the ActBlue page.