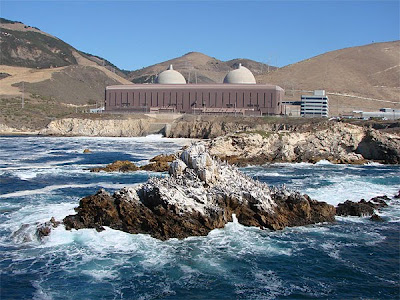 A few weeks ago Blue America endorsed Norman Solomon for the North Bay seat Lynn Woolsey is expected to give up next year. People have asked me why the rush and pointed out that some of the other candidates are “liberals” too, “like Norman.” There are very few people “like Norman.” He’s not just a movement progressive– rather than a “liberal too”– his is a voice that has helped define what the progressive movement in America is. If you can, please consider making a donation to Norman’s campaign. As you’ll be able to see from the guest post below, it’s not likely he’ll be funded by any of the utilities who have given generously to the “liberals too” running against him for the nomination.

The facts all point to this “inconvenient truth”– the time has come to shut down California’s two nuclear power plants as part of a swift transition to an energy policy focused on clean and green renewable sources and conservation.

The Diablo Canyon plant near San Luis Obispo and the San Onofre plant on the southern California coast are vulnerable to meltdowns from earthquakes and threaten both residents and the environment.

Reactor safety is just one of the concerns. Each nuclear power plant creates radioactive waste that will remain deadly for thousands of years. This is not the kind of legacy that we should leave for future generations.

In the wake of Japan’s Fukushima nuclear plant meltdown, we need a basic rethinking of the USA’s nuclear energy use and oversight. There is no more technologically advanced country in the world than Japan. Nuclear power isn’t safe there, and it isn’t safe anywhere.

As someone who was an Obama delegate to the 2008 Democratic National Convention, I believe it would be a tragic mistake for anyone to loyally accept the administration’s nuclear policy. The White House is fundamentally mistaken in its efforts to triple the budgeting of federal loan guarantees for the domestic nuclear power industry, from $18 billion to $54 billion.

Our tax dollars should not be used to subsidize the nuclear power industry. Instead, we should be investing far more in solar, wind and other renewable sources, along with serious energy conservation.

The Nuclear Regulatory Commission is a nuclear-friendly fox guarding the radioactive chicken coop. The federal government has no business promoting this dangerous industry while safe and sustainable energy resources are readily available.

The fact that federal law imposes a liability cap of about $12 billion on a nuclear power accident is a reflection of the fact that those plants are uninsurable on the open market.

As a candidate for Congress in the district that includes Marin and Sonoma counties, I intend to make this a major campaign issue. It remains to be seen whether my one declared opponent, Assemblyman Jared Huffman, will join me in urging a rapid timetable for the closure of California’s nuclear power plants.

Huffman has ties to California’s nuclear-invested utility PG&E. Between 2007 and 2009, according to campaign finance data compiled by nonpartisan Maplight.org, he received $11,100 from PG&E, which owns and operates the Diablo Canyon nuclear plant.

While Huffman and other state lawmakers in February signed a letter to a federal commission on America’s nuclear future citing seismic “concerns which deserve to be more closely examined,” the time for equivocation on nuclear power is long past. We don’t need yet more study on whether to operate nuclear plants on fault lines.

People want bold and responsible leadership as we face up to the well-documented realities of nuclear power on this fragile planet.