We’ve always felt that supporting progressive candidates is the way to go in any election and if you’re experiencing any debt ceiling blues, Blue America is auctioning off a stratocaster guitar signed by the entire Green Day band.

We’ve written about Ilya before, because he’s a serious progressive with a real chance to kick out Rep. Robert Dold, a Republican freshman who has shown he’s more than willing to put anything, including Grandma’s Medicare, on the chopping block, if his Tea Party so dictates.
—

In the midst of the House debate around this fabricated debt ceiling “crisis,” Ilya was one of only a few Democratic candidates around the country willing to take the potentially risky position against the debt deal, saying, very clearly, he would have voted “no” if he was able.

So here’s our point of optimism. We can seize this moment and reject the Tea Party politicians who hijacked this process (and the Blue Dogs who proved their willingness to sell out working families once again). Let’s support Ilya and other candidates who actually took the right position, even when it meant standing up to powerful forces within their own party.

Here’s the Act Blue page we set up for him and the other progressives who are standing up for working families against the corporatocracy. Now’s our chance.

Off the topic, we’d like to raise $2,000 for Ilya’s campaign in the next 24 hours. I don’t expect any one person to contribute that much, of course, but if enough people give $10 and $20 contributions, it’s going to mount up fast– and that will set off the trigger. Trigger? A different kind of trigger from the one in the SatanSandwich bill. You see, I used to run Reprise Records, Green Day’s record company, and Ilya mentioned to me that he’s a huge Green Day fan. So, when we hit the trigger, someone will be eligible to win an autographed– like in signed by Billie Joe Armstrong, Trey Cool and Mike Dirnt– Fender strat that the band gave me around the time they were recording Warning. So who gets the guitar? If we were Republicans, we’d give it to whoever gave the most money. But we’re not. So everyone has an equal chance. As soon as we reach $2,000 we start a random drawing. We’ll pick one name out of a bowl on Thursday at 6pm (PT). and I’ll send you the guitar. Enter here. 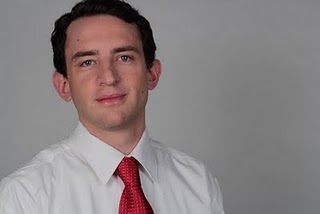 Digby was on the Nicole Sandler show and said this:

We have the patience and the commitment to go beyond these various ups and downs and we keep our eyes on the prize from election cycle to election cycle. 2010 was brutal. But we’re in a period of political disequilibrium and there’s good reason to believe that we can come back from that.
And anyway, what choice do we have, aside from moving to another country? (And right now, there aren’t a whole lot of safe havens — the whole world is in turmoil.)
So, Blue America continues its long and arduous quest to elect more progressives to congress and help them form an independent bloc, answerable to their supporters. It’s not easy changing a Party’s political culture but we believe it’s essential that we try.

I told Howie that I’d take the guitar myself, but that would be selfish of me so please donate to Ilya Sheyman and get a chance to win this very cool guitar. Enter here