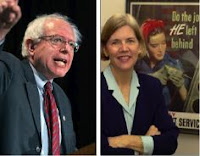 Bernie and Elizabeth depend on Grassroots (that’s us!) not Wall Street. Every penny goes directly to their campaigns. Please give what you can.

Blue America doesn’t usually send e-mails asking for contributions because of some phony Inside the Beltway “deadline”– as if a $20 contribution is any more or any less crucial today or tomorrow. But we just got a wretched plea from the Democratic Senatorial Campaign Committee, begging for money for the dreadful and unpopular incumbents whose voting records make it impossible for them to raise money from grassroots Democrats. I mean who in their right mind is going to donate to conservative shills like Ben Nelson, Joe Manchin or Claire McCaskill? They’ve alienated Democratic voters and the lobbyists and Big Business interests they have normally counted on would rather replace them with Republicans. Good riddance!

On the other hand, Blue America would like to ask you to help us send a message to the DSCC today (or tomorrow– we don’t care) by helping us support Bernie Sanders (I-VT) and Elizabeth Warren (D-MA), two people who have fought long and hard for ordinary American families, not for the banksters and not for the corporate elites.

She’s running for Ted Kennedy’s old seat, which is currently occupied by Wall Street’s favorite senator, Scott Brown– and that’s what business-friendly Forbes called him… admiringly. One day Elizabeth may be the tellers’ favorite senator, but she’ll never be the banksters’ or hedge fund managers’!

“I came out of a hard-working middle class family. I lived in an America that created opportunities for kids like me… I now see an America in which our government works for those who already have money and already have power… I would walk out of a senator’s office and the office would be completely jammed with lobbyists who were there to explain why the consumer agency was bad. There was not enough room for them to sit down.’’

Blue America has only endorsed 2 people for the Senate so far this cycle. It’s hard to imagine any other incumbents and so far the only other challenger who looks worthwhile is Tammy Baldwin in Wisconsin, although she hasn’t declared yet. So we’re asking you to take a look at our Senate page and see if you can give us a hand with Bernie and Elizabeth… either before or after the DSCC’s midnight “deadline.”

We are all in this together,
Digby, John, Howie and the Blue America team

Check out this video of Elizabeth Warren, who is worthy of our support.