Is Mitt Romney– Or Any Of Those Buffoons — Fit To Be Commander-in-Chief? 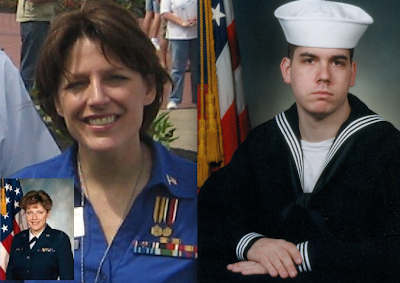 Connie & John aren’t gay, but I bet a right wing mob would boo them anyway

Tomorrow afternoon, Michigan Democratic congressional candidate John Waltz is being formally endorsed by Blue America and he’ll be blogging with us at Crooks and Liars (2pm, ET). Ohio Democrat Connie Pillich won’t be doing a Blue America session until the end of October. Both, however, have something in common that I want to share with you now. Connie and John both enlisted in the military. Connie served in the Air Force during the Gulf War. John served in the Navy and saw action in both Iraq and Afghanistan. Both, like all good Americans, were horrified at the spectacle last night at the Fox Republican “presidential” debate when the audience booed an active duty America soldier asking a question. But the ignorance and bigotry of the audience was one thing… how about these men and a crazed woman who want to be Commander-in-Cheif of the United States Armed Forces? Not one had the decency– or the courage– to stand up to the vile booing mob of louts in the audience. Romney may have looked embarrassed, but he didn’t raise a well-sculptured eyebrow.

“It is quite obvious that Republicans are fully committed to hatred and blatant racism,” John told us this morning, “which became quite evident at the debate last night. Not one presidential candidate uttered a peep about the hateful and homophobic booing of a gay soldier in Iraq. I challenge any Republican or Tea-liban member to sign up for the military and get shipped over there and see if they have any complaint when a gay or lesbian soldier is protecting their lives.

“I know during my time in the service we had a massive fire and several of us were pulled out by a lesbian and not one of us stopped her to ask if she was sleeping with a man or woman that night. This behavior is despicable and should never be tolerated. The repeal of DADT was a major step forward in civil rights for our nation and anyone that is willing to serve our nation to protect our freedoms should never be discriminated against.”

John Waltz is the kind of candidate Blue America is backing this year. I hope you’ll come by tomorrow and meet him. If you’d like to donate to his campaign, you can do it here at our Blue America ActBlue page.

Connie serves in the Ohio state legislature and lately her battles have been around the legitimate aspirations of working families and keeping the Republicans from doing away with democracy in her state. Previously she served in support of both Operation Desert Storm and Operation Desert Shield. “I find it reprehensible that any American would jeer any American soldier who simply reported for duty. All of our members of the Armed Services deserve our respect and support. And anyone running for president who will necessarily become Commander-in-Chief ought to defend and support all of our troops against such malice.” Connie isn’t up on the Blue America page yet (soon), but you can contribute to her campaign here for now.

Richard Allen Smith from VoteVets was as outraged– but not as surprised, writing today that the Republican audience was finally honest with America about how they feel about America’s service members when they booed an active duty Soldier serving in Iraq.

[T]he audience didn’t boo him simply because he’s a Soldier. They booed him because he is a gay Soldier. But that shouldn’t matter any more than if he were a Hispanic Soldier or a blue eyed Soldier or a brown haired Soldier. He is an American service member serving in harms way. But the audience, as well as the Republican candidates who allowed this to happen without a word being spoken in support of the Soldier, still gave us valuable insight into the Republican party.

Republicans will wear their flag lapel pins and put yellow ribbon magnets on their car so long as you support their narrative. The moment you deviate from their party line, they throw you in the gutter. It’s what they did to Pat Tillman. It’s what they did to this Soldier last night, and it’s what they’ve done for decades to Soldiers and Veterans by exuding superficial patriotism on the campaign trail and betraying us once they end up in office.

It isn’t just a class war we’re being dragged into. It’s a full-fledged war against fascism. Except this time the fascists aren’t be fronted by a creep in Germany with a funny little mustache.