The Koch Brothers Give Candidates Millions… But We Have Guitars 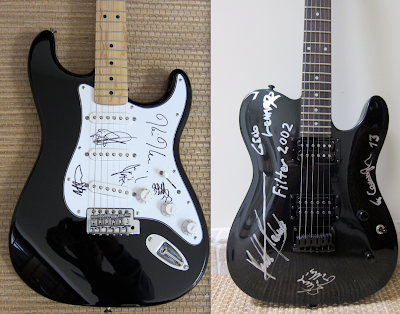 Yesterday we ended our Barenaked Ladies guitar giveaway. In the end, 403 donors gave $13,790, most of it to progressive activists and congressional candidates Norman Solomon (CA-2) and David Gill (IL-13). The average contribution was $34.20 and the winner was Christopher Bugbee who gave a recurring contribution to Norman and David of $25.00. He’s the proud owner of a Fender Strat signed by all the members of the Barenaked Ladies– including ex-lead singer Steven Page. And now we’re on to another guitar and another campaign! This time a sleek black Squier Telecaster signed by all the members of Filter.

The idea is that we’re going to send the guitar as a thank you to one random supporter of Ken Aden’s Run 2 End Hunger II here. It was signed– back in 2002– by all the members of Filter, riding high on their smash hit, “Hey Man, Nice Shot.” Before becoming a candidate for Congress, Ken, an Iraq and Afghanistan War vet was immersed in running a non-profit community-based self-help group in Arkansas, Residents 4 Arkansas, Inc. Last month he was honored by the White House for his community service and met with President Obama and members of his cabinet to talk about the role of volunteerism in America. Ken has been awarded the Military Outstanding Volunteer Service Medal, the Army Commendation Medal, the Achievement Medal, the Joint Meritorious Unit Award, the National Defense Service Medal, the Global War on Terrorism Expeditionary Medal, the Global War on Terrorism Service Medal, the Commissioned Officer Professional Development Ribbon, the Army Service Ribbon, the Overseas Service Ribbon, the Multinational Force and Observers Medal, the Combat Infantryman Badge, and the Parachutist Badge. Right now he’s in the middle of a 253 mile, 7 day run across his district (ending May 5) to raise awareness and to raise cans of food for families who are hungry in Arkansas. When he ends his run, Blue America will thank one of the supporters of Ken’s candidacy with the Filter guitar. Supporters can contribute here or send a check– or even just a note– to PO Box 27201, Los Angeles, CA 90027. Everyone will have an equal chance to “win” the guitar, regardless of how much you contribute– or even if you just let us know you’re praying for Ken or rooting for him. 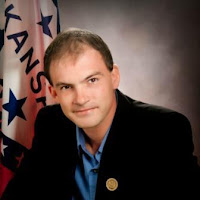 Some may see Ken as a “do-gooder” but he’s a tough as nails progressive running in the reddest district in Arkansas. Rather than shrink away from a fight as others in his state have done, this Army Combat Veteran is taking it to the streets and standing up for equal rights for all. As you’ve probably guessed by now, the main part of his campaign focus is on community service work– as well as renewable energy technology, veterans rights, and the protection of Social Security and Medicare. In a recent quote he said that “if you even think of cutting Medicare and Social Security you ARE a criminal! The time for corporate prostitution has come to an end!”

As we mentioned on the Act Blue page, we were chatting with Ken last week and he told us about a woman he met while out campaigning the weekend before. She considered herself an independent, and was a supporter of Ken’s very right-wing opponent– Wal-Mart’s personal Congressman, Steve Womack– back in 2010.

“I wish I would have met you back then, because I never would have voted for him,” is just what she told Ken on Saturday.

We liked that, because it is the opening lyric of Filter’s “Hey Man, Nice Shot,” we figured that would be the perfect guitar for Ken’s campaign. (Not to mention that Ken is a huge fan of Filter’s music himself.) What Ken’s doing is so important that we wanted to encourage all of our friends to help. But, since we know we can’t ask you to send canned food through the mail even though we are 100 percent in support of our brothers and sisters at the APWU, we thought we’d ask you to pledge to donate $25.30 to Ken’s race– that’s one dime for every mile that he’ll be running across the district. Of course if you can’t donate that amount any help would be greatly appreciated. And if you want to contribute more… please don’t hesitate.

And, for every person who makes a contribution through this page for Ken’s campaign, you will be entered in a random drawing to win a guitar signed by every member of Filter as a “thank you” from Blue America. Everyone has the same shot, whether you contribute one dollar or 1,000 dollars– or even if you just send us a note to the PO Box.

So don’t delay– please make your contribution to Ken’s campaign today, and by doing so, you’ll have a direct hand in ending the plight of impoverished families today. GO KEN GO!!