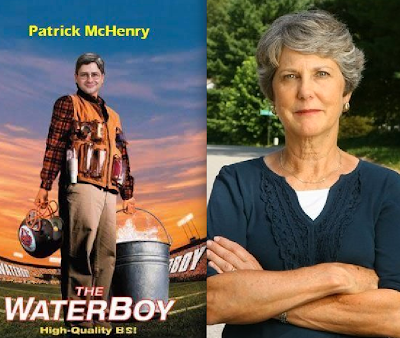 As you know by now, we had some sad news out of North Carolina on Tuesday, the approval of the homophobic Amendment One. We did, however, have one powerful victory that night too. In the Democratic primary, one district, NC-10, voted overwhelmingly for a progressive state Representative, Patsy Keever, to go up against Republican incumbent Patrick McHenry. Blue America endorsed Patsy early because of her progressive record in the state legislature, because of her effectiveness as a leader, and because Steve Israel of the DCCC had recruited and helped finance a conservative opponent, someone who opposes a woman’s right to Choice and someone who claims God opposes the LGBT community. Had she won, she and Patrick McHenry could have had a real love-fest. But she lost and Patsy won. In fact, Patsy won by a landslide. Steve Israel’s recruit wound up with 25% of the vote– and lost every single county to Patsy.

But now the real work begins. Patsy won’t have as easy a time in the general as she did in the primary. Democrats admire her work in the state legislature and admire her for sticking up for working families and for equality. Although the new 10th congressional district is far bluer than the old district that used to elect and reelect McHenry, Patsy is still going to have to get her message out to independents and mainstream Republicans. (Note: Buncombe County, the heart of the district, was one of the counties that voted against Amendment One.) If you’d like to help Patsy move on and win the general election, please consider making a contribution here at our ActBlue page.

In Patsy’s own words:

• I will be a voice for all children looking for a world-class education.

• I will be a voice for every man or woman looking for quality work at a fair wage.

• I will be voice for our grandchildren who deserve clean air and clean water.

• I will be a voice for our seniors who have earned a fully funded Medicare and Social Security program.

• Finally, I will be a voice for equality for all people.

Patsy is dedicated to helping her constituents no matter their political persuasion. As she said before, “as a school teacher you are there to teach and mentor every student, no matter what.” She has always put people before politics and has a history of bringing people together to find solutions to real life problems.

On the other hand, we have Congressman Patrick McHenry, who has consistently put his political career ahead of his constituents. More than simply putting his career first, he doesn’t understand the difficulties facing North Carolina’s or America’s working families. The difference is clear: Patsy Keever has been fighting for her community and state for a long time and always puts its people first. McHenry’s career is an egregious example of always putting powerful interests ahead of his own constituents. He’s the most unethical and dishonest member of North Carolina’s congressional delegation and Patsy has an opportunity to work with voters from across the district who are sick of him and his own personal war against women.

I’m not going to talk about McHenry being a hypocritical closet case today or even about his involvement in a gay triple homicide in Orlando. Today let’s just take a look at McHenry’s “greatest hits” (against the American people)– themes we’ll be coming back to a lot between now and November. And this rollcalls are all just from the current session of the House!

Description: An amendment offered by Rep. Mike Pence (R-IN) would have prohibited any funds in the bill from being made available to the Planned Parenthood or its affiliates.

Description: The measure, which did not pass, would have ensured that no hospital or health care provider can be exempted from any Federal or State law that requires them to provide any medical examination, treatment, referral, or transfer to prevent the death of a pregnant woman with an emergency medical condition.

Description: The measure, which did not pass, would have clarified that the federal government is expressly not permitted to gain access to the private medical records of victims of rape and incest.

Date: May 4, 2011
Link to vote: Vote #291
Bill: H.R. 3
Related story: No Taxpayer Funding for Abortion Act Passes House
Note: This vote was not on the underlying bill, but rather on the Democratic Motion to Recommit.

Description: The measure, which did not pass, would have increased funding for Pell Grants.
Date: February 19, 2011
Link to vote: Vote #146
Bill: H.R. 1
Note: This vote was not on the underlying bill, but rather on the Democratic Motion to Recommit.

Description: The measure, which did not pass, would have required charter schools receiving federal funding to conduct background checks to determine whether prospective employees have been convicted of sexual or violent crimes.

Description: House Republicans overwhelmingly against an amendment that would have prevented the EPA from vetoing permit applications for mountaintop removal.
Date: February 19, 2011
Link to vote: Vote #135
Bill: H.Amdt. 157 to H.R. 1

Voted against protecting seniors and children from asthma and lung disease

Description: The measure, which did not pass, would have prohibited the underlying bill from limiting EPA’s Clean Air Act authority to protect the health of children, seniors, and those with asthma and lung diseases from the effects of air pollution emitted by large sources (those that emit 75,000 tons or more of carbon pollution annually).

Description: The measure, which did not pass, would have retained the EPA’s authority to set water pollution standards and review permits when certain pollutants, including arsenic and perchlorate, are being discharged into waters that are a source of public drinking water.

Voted to protect polluters over children and pregnant women

Description: The bill would replace the Consumer Financial Protection Bureau’s director with a five-member commission. It also would lower the vote threshold required for the Financial Stability Oversight Council to override Consumer Financial Protection Bureau rules from two-thirds to a simple majority and allow the council to override regulations that threaten the stability of individual institutions.

Voted with congressional crooks to exempt themselves from insider trading laws

Description: The measure, which did not pass, would have provided a 3.1% payroll tax cut, an expansion beyond the Republican bill’s 2% cut, paid for by a surtax on millionaires. This would not have affect the Social Security Trust Fund, which would have been held harmless for the lost revenue. The MTR would also have prevented insider trading by Members of Congress by enacting the STOCK Act into law and freezes Member pay.