Steve Israel’s Ignored WA-08, so Jason Richie Will Use Own Strategy to Beat Loathsome Dave Reichert 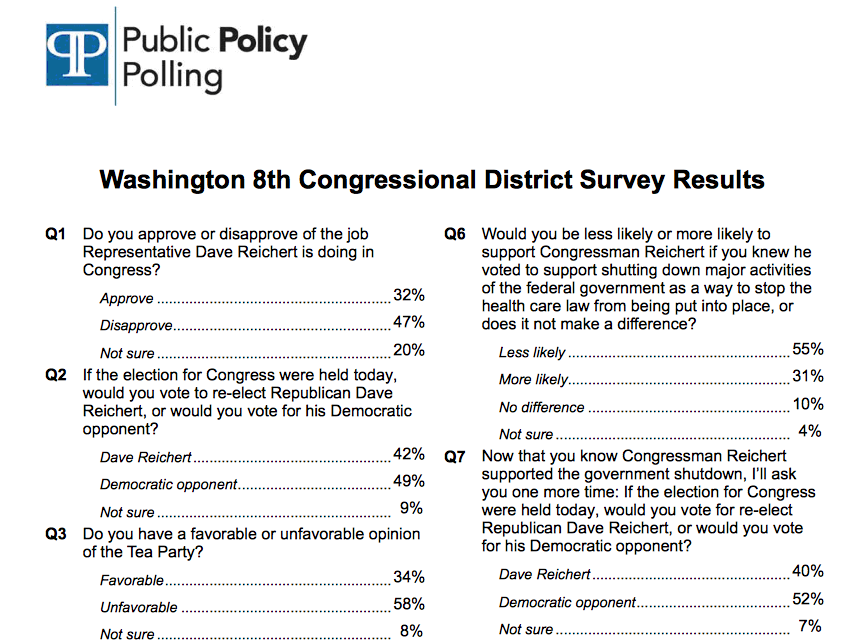 Blue America’s last endorsement of the 2014 cycle is Jason Ritchie, the candidate running for the seat currently held by conservative Republican Dave Reichert in a swing district that stretches from the suburbs south and east of Seattle all the way out to Wenatchee and Ellensburg.

Obama won the district both times, by almost 15,000 against McCain and by close to 5,000 against Romney. Both of Washington’s Democratic senators, Maria Cantwell and Patty Murray, also won WA-08.

It’s one of the likeliest districts for a Democratic take-over in the country, but Steve Israel has taken it off the table and the DCCC is not contesting it or helping Jason in any way. There hasn’t been a single poll other than the one above, Reichert refuses to debate and he’s raised $906,389 to Jason’s $133,323.

We’re asking you to consider chipping in whatever you can to help Jason, a stalwart progressive, with his field operation and Get Out The Vote efforts.

Reichert is a GOP hack and votes like a zombie— backing the Tea Party in their demands to shut down the government, suing President Obama and 54 votes cast for wiping out the Affordable Care Act. Reichert, who wants to eventually run for governor, has a clear record as a cog in the Republican Party obstructionist machine. We feel that once Steve Israel is gone from the DCCC, WA-08 will be a natural battleground for the Democrats and we are impressed that Jason has talked about the need to mount a two-cycle strategy for taking back the district.

“We’re running a strong field operation with over 260,000 voter contacts to date,” he told us this week. “Win or lose, I’ll be back in 2016 and we’re building the infrastructure, identifying the voters, and organizing to win now and in the future. This is a purple district. This is a winnable district— but I need your help in order to make that potential a reality.”

One of the most important planks in his platform has been his advocacy on behalf of students and their families who have become mired in debt while seeking an education. While Germany has just passed legislation to guarantee free university education for all qualified students, in America college is becoming more and more out of reach for the children of the working class.

“40 million U.S. citizens currently owe more than $1.2 trillion in student debt,” says Jason. “7 out of 10 college students graduate with a student loan debt that averages $29,000. These debts often prohibit young people from buying their own homes or investing back into our economy.” He wants to go to Congress to do something about it.

If we are serious about generating an economic stimulus, we can get money back into the hands of millions of Americans by simply allowing them to refinance their student loans. I would support the House version of Elizabeth Warren’s Bank on Student Loan Refinancing Act (Senate Bill 2292), which would have allowed people with student loans taken out prior to 2010 to refinance at 3.86%. This is dramatically lower than the 7.5% that most student loan recipients currently pay.

Partisan Republicans like Senate Minority Leader Mitch McConnell blocked this legislation from a vote in the Senate. When it does pass, I’ll co-sponsor the House version and I’ll fight for its passage into law.

People shouldn’t have to go bankrupt to afford a college education. Republicans refuse to stand up for the millions of people with student loans paying outrageous interest rates. I’ll make fighting for student debt relief a priority.

There will be no more new Blue America candidates this cycle. Let’s give Jason a strong welcome on our ActBlue list.