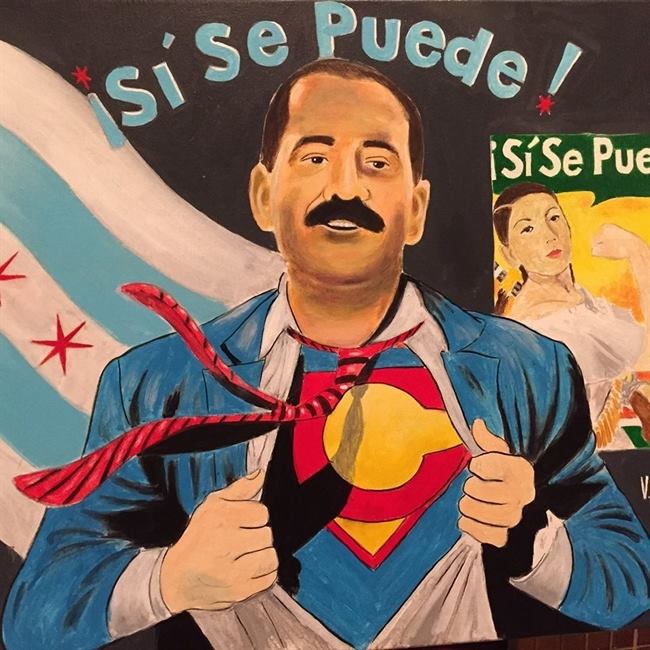 Chicago’s mayoral race is two weeks from Tuesday– April 7. Today, Monday, is the first day of early voting. The race pits the pay-for-play politics and endemic corruption embraced by careerist and Wall Street shill Rahm Emanuel against the communities and neighborhoods of one of America’s great cities trying to reclaim its dignity and its independence. The race is a neck and neck contest between Emanuel and Jesus “Chuy” Garcia. Today Blue America has joined with our friends and allies at DFA, PCCC, MoveOn, Daily Kos, SEIU and Illinois Working Families to launch a money bomb on behalf of Chuy’s campaign.

Does it seem to late in the cycle to make an effective contribution? It isn’t– thanks to electronic contributions delivered directly to campaigns by ActBlue. Netroots donors can still have a significant impact on the outcome of the race. No one ever thought Chuy would have the ability to raise as much money as Emanuel, who had already spent $30 million in the first round to Chuy’s $1.2 million. But no one thought Chuy needed to match Emanuel either. Emanuel’s record as mayor has devastated Chicago’s neighborhoods and most voters have soured on him. Chuy’s campaign was designed from the beginning to be a person-to-person operation– street politics, door-to-door, friend-to-friend, neighbor-to-neighbor.

Money contributed today isn’t going to be wasted on expensive network TV ads– which Rahm is spending $10 million on– but will be spent on real community outreach efforts.

If you’re thinking about donating, remember that it costs the campaign $6 to provide a box lunch for a volunteer out in the field. This campaign is going to be won because of a get-out-the-vote effort. That’s what Chuy’s operation is all about right now. Providing 50 buttons for distribution at an event is $25. It costs $100 to print 1000 copies of an 8½x11 piece to pass out on street corners, outside grocery stores, on subway platforms, in front of churches and synagogues and community centers, outside high school basketball games, at parades and rallies. Money contributed today–even small amounts– combine with others’ to make a real difference.

If Rahm loses, it will shake up Democratic politics to its core; a shake-up that is long overdue. Please consider contributing what you can– today, 2 weeks out– via ActBlue. There is no such thing as a contribution being too small to make a difference.

Last week, looking back at his presidential run in 2004, Howard Dean explained that he had

“represented the ‘Democratic wing of the Democratic Party’– a line inspired by Paul Wellstone that captured the spirit of my grassroots campaign. Jesús ‘Chuy’ García is running a similar people-powered campaign in Chicago and that’s why I am proud to announce that I am endorsing him as the progressive choice to be Chicago’s next mayor. Chuy García brings years of experience standing up for the people of Chicago. He worked with Harold Washington, Chicago’s reform mayor, to clean up Chicago in the 1980s. He also served alongside a then-unknown Illinois State Senator, Barack Obama, in the 1990s. In that time Chuy García fought for better schools and neighborhood services while developing the leadership skills required to lead Chicago in the 21st century. As mayor, Chuy García will focus on the needs of Chicago’s working and middle class. He’ll work to improve public schools and take a community-oriented approach to ending the violence in Chicago’s neighborhoods. Chuy García will put the people first, not the 1%.”

Like Chuy says in the video (that I highly recommend you see) at the donate link, “Chicago doesn’t belong to ‘$omebody.’ Chicago belongs to Everybody!” Let’s see how far a progressive Money Bomb for Chuy Garcia can go to start the ball rolling towards a progressive tidal wave sweeping the Country.