Alan Grayson– A Congressman With Spine, Nerve, Backbone and *Cojones* 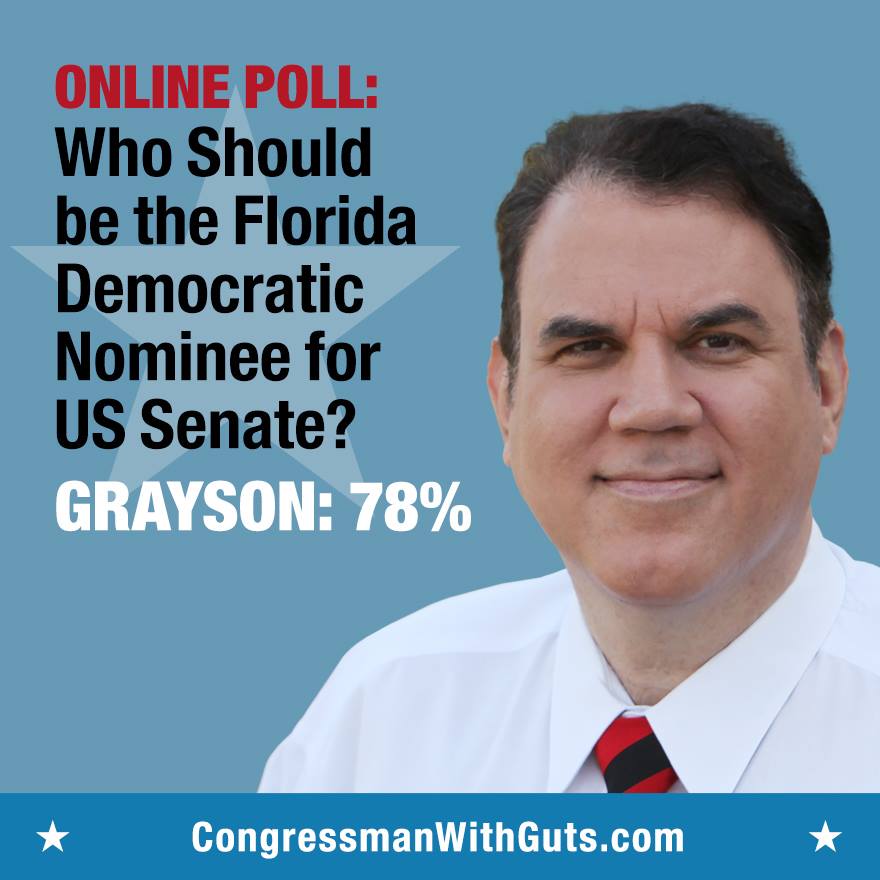 Last Monday we offered to give away a rare, collectible platinum record award for Enya’s  Paint the Sky with Stars. Tomorrow (Monday) is your last chance to “win” this contest. At noon (PT/3pm on the East Coast), we’ll randomly select one person from this who contributed to Alan Grayson’s campaign on this page.

I worked with Enya while I was at Warner Bros and I found her to be one of the most fascinating artists on the roster– just as Grayson is the most fascinating Member of Congress. Blue America has been part of the team working to persuade Grayson to give up his Orlando-based House seat to run for the U.S. Senate seat being abandoned by Marco Rubio. Your contribution goes to Grayson’s federal account, which can be used interchangeably for a House reelection campaign or for a Senate run.

So far over 320 people have contributed on the Draft Alan Grayson ActBlue page. Keeping another conservative enemy of working families out of the Senate– whether a Republican or New Dem and Wall Street shill Patrick Murphy (the corrupt Establishment pick)– is a worthy endeavor and worth the investment… even if you don’t win the Enya award!

Grayson considers his supporters as people “with both a head and a heart. You’re something of an idealist,” he wrote, “like I am. You want to live in a world of justice, equality, compassion and peace. And you’re willing to lift a finger or two to make that happen.”

A couple of years ago, when I was out of Congress and fighting to get back in, nine days before the election, people like you made more than 60,000 volunteer phone calls in a single day – yes, in a single day – to Democratic voters in my district, urging them to vote. And I returned to the House in the greatest comeback in the history of the House– a 43-point swing in just two years. Thanks to people like you.

But it’s not too early to give.

Q. What is the best way to support our campaign for justice, equality and peace?

A. Make a commitment– give every month.

We have had more than 116,000 people give to this campaign. I’m grateful to them all. But the ones who have given us the biggest boost are the ones– several thousand– who have signed up to contribute to our campaign every month.

Some give as little as a dollar. Most give between $20 and $25 each month. A certain number contribute $50 each month. And a few give $100 each month, knowing that over the course of the whole campaign, that means that they “max out,” reaching the legal limit.

The numbers build up, and they build up fast. During several months last year, monthly contributions comprised around half of our online donations. That’s what made it possible for me to be the only Member of the House who raised most of his campaign funds from small donors. Again. You and I, together, we are establishing a new paradigm for campaign finance.

It just depends on what you can afford, and how much you care. But as everyone knows, it’s a lot easier to give $100 for 24 months than it is to write a check for $2400. Unless you happen to be a Koch Brother.

(I know that you’re not a Koch Brother. They don’t read stuff. They hire people to read stuff for them.)

So here is my “ask”: if you can afford it, please sign up for monthly contributions to our campaign. And please do it today, not next October.

A Congressman with Guts.

Here’s where Blue America team members can give– once, monthly, a lot or a little… whatever works for you.