Pramila Jayapal Did Everything We Wanted– And Then Some 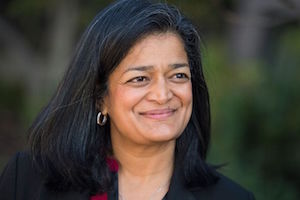 Last year Blue America introduced you to Pramila Jayapal. We were the first group outside of her home state to endorse her in 2016. And this year– based solely on what she’s done since being elected– she’s the first freshman we’re endorsed for 2018. We should all be very proud that we helped Pramila get her message out to the voters in Seattle, who elected her overwhelmingly– 56% to 38%. She has delivered everything we hoped she would. If you look at ProgressivePunch, you’ll see she’s the only member of Congress with a lifetime score of 100%. Let that sink in for a moment.

And we didn’t go to bat for Pramila just because we know she would vote right. What we saw in her– and she even more now– is a LEADER. Since getting to DC, she’s been a vocal advocate and a fighter for working families in Washington and across the country. She’s held rallies and forums on the topics of healthcare, immigration and women’s rights; she’s been in the forefront of the battle for affordable college and has swiftly and fiercely opposed any anti-immigrant legislation that has been introduced by the Trump Regime.

She’s been at the center of the resistance against Trump: marching for fairer treatment of women in the Women’s March on Washington, holding the second largest rally in the country to save health care, and taking on the Trump administration over the detentions of immigrants at the Seattle airport during the fallout of the initial executive order that halted U.S. travel for members of certain Muslim-majority nations.

In addition to her constituent engagement and advocacy, Pramila has already co-sponsored approximately 50 pieces of legislation in her first three months in office on subjects ranging from presidential transparency to immigration rights and deportation relief. She has also introduced three bills aimed at ensuring justice and accessibility for all. The first was introduced in conjunction with Senator Kamala Harris to secure access to legal counsel for immigrants who have been detained. The second, moves to end a program in which state and local law enforcement were made to enforce federal immigration law. The third proposed measure seeks to lower the astronomical costs of prescription medications, protecting access to lifesaving drugs for those who need it most.

As these bills and legislative measures move forward, Pramila continues to dedicate her time to fighting assaults on our moral values and defending our nation’s most vulnerable.

As a freshman member of Congress, Pramila has made it her mission to mount the strongest possible resistance against Trump and his administration. She serves as the vice ranking member of the House Budget Committee, the senior whip of the House Democratic Caucus, the vice chair of the Congressional Progressive Caucus and a co-chair of the Women’s Working Group on Immigration Reform. What she’s not busy doing is fundraising. But her aggressive efforts on behalf of working families and immigrants had put a target on her back in the eyes of corporate heavy-weights. Republicans don’t win in Seattle, but the same forces that back Republicans are trying to recruit a corporate-friendly, conservaDem to run against her. Blue America wants to show her– and her opponents– that we love what she’s been doing and that we still have her back.

In addition to her congressional leadership roles, she is a member of the House Judiciary Committee, the House Subcommittee on Immigration and Border Security and the Congressional LGBT Equality Caucus. Much of Pramila’s policy work is centered on immigration, environment, equality, education and health care access. She was a forerunning opponent of Trumpcare and is actively involved in seeking clarity regarding the Trump Administration’s relationship with Russia.

Let’s help make sure she can keep devoting all her time to what’s important for the country and for her constituents.

Team Hakeem Wants Us To Believe That Progressives Can’t Win– Meet Sarahana Shrestha, Who Just Did

These are tough times in so many ways. But you know what helps lighten the spirit and inspire our common humanity? MUSIC! So let’s do something fun — make a great playlist in the comments. Share favorites. All genres. If you have a clip all the better. This can be a happy place.

And can we please get @potus to pardon #RealityWinner