STUFF IT, Mitch. Same to the turtle you rode in on. 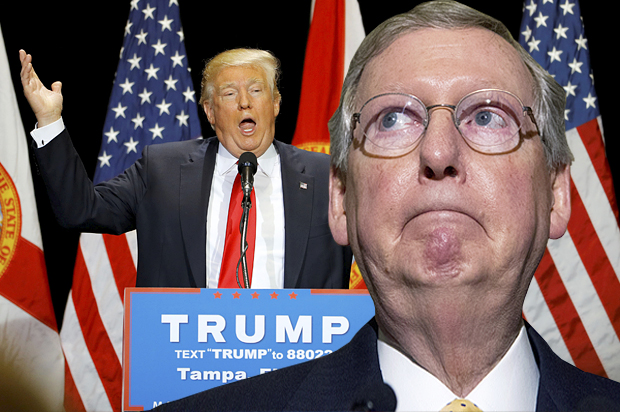 Another week in Trump’s America and it just gets worse and worse. Everyone said that when the atrocity known as Trumpcare was barely passed in the House that we shouldn’t worry. “They’ll fix it in the Senate” they said. Well, they didn’t. They tweaked it a little bit in some ways but overall they made it worse.

This week they’re planning to vote on it and then skip town before anyone has a chance to chase them down the halls of congress holding pitchforks and torches. If they get that done when they return from the 4th of July break they may skip the usual conference committee to reconcile the two bills, quickly pass the very similar Senate version through the House and then get ready to play their roles as props in the the greatest show on earth: the Oval Office in which President Trump will bask in the glow of his greatest success so far — enacting the cruelest piece of legislation in modern memory.

By all accounts that’s Mitch McConnell’s plan anyway. At this moment there are still a number of possible choke points. The so-called moderates who will have to face voters are nervous, but they’re known for their cowardice so it’s highly likely they will accept some superficial changes and then rush before the cameras to defend the lie that it’s been substantially “improved” from being monstrous and evil to simply malevolent and brutal. Counting on them to stop this heinous disgrace of a “health care” bill is a fool’s errand.

It’s much better to look to the ruthless sadism of the far right and “libertarians” such as Rand Paul and Mike Lee. They are known for their refusal to take for an answer when offered the opportunity to rip holes in the safety net because they demand its total destruction all at once. Unfortunately, counting on them would require one more wingnut vote in the Senate, probably Ron Johnson from Wisconsin or Ted Cruz from Texas. Johnson is the most intellectually limited man in the chamber so it’s a totally random shot with him. Cruz is well … Cruz. He will be the hero who votes for it unless it won’t pass anyway at which point he will join the “rebels” and pretend he was their leader.

If it does pass the Senate they will have to go home next week and face their constituents before a final vote. It’s not going to be pretty. If you saw the appalling footage of the disabled protesters in front of Mitch McConnell’s office being pulled out of their wheelchairs and dragged down the hall by police you know what it’s going to look like. This is what it’s come to.

The stark fact of the matter is that Mitch McConnell and Paul Ryan and virtually every member of the Republican congress are trying to pass a bill that will literally result in the deaths of tens of thousands of people, bankruptcy for many more and suffering for millions. And why are they doing this? They want to get their hands on 800 billion dollars that funds Obamacare so that for the first time since 1986 they can give permanent tax cuts to the likes of Ivanka Trump and Jared Kushner.

Because when you get down to it, that’s what all this is about.

The Democrats are unified in opposition, thank God. (As you well know that’s not always a given …) And activists around the country are gearing up for energetic protests over the next few weeks. We’ll see what happens.

But if this week has shown us anything it’s that it’s vitally urgent that the Democrats take back the House in 2018. If the Democratic Senators can hold their seats and pick off a couple of Republicans all the better. But it’s imperative that we stop Ryan and McConnell. They are so drunk with power, they are no trying to enact bills that will literally kill people with no other purpose than to pass out money to rich people.

You know what to do. If you can, over the next couple of weeks contact your Indivisible, Our Revolution, Move On or whatever groups with whom you are involved to find out where they are planning to protest in your area. Call your Republican Senators and congressional reps and remind them that lives are on the line.

Can you please donate to our Blue America candidates today, so they can get the word out that help is on the way?. We simply have got to stop these obsessed, bloodthirsty Republicans and their cretinous imbecile of a leader before it’s too late.

This is what the undermining of American democracy looks like. This is what is taking place all across the country. This is why it is an outrage that two Democratic senators have joined Republicans in refusing to pass the Freedom to Vote bill. https://t.co/U2zWMoIxG6

This spending is unprecedented in SF school board races but hey, if they can spend $250k to buy school board seats in the east bay why not? https://t.co/84Vs0tC38X