Will 3rd Time Be The Charm For MI Dems? Paul Clements Thinks So 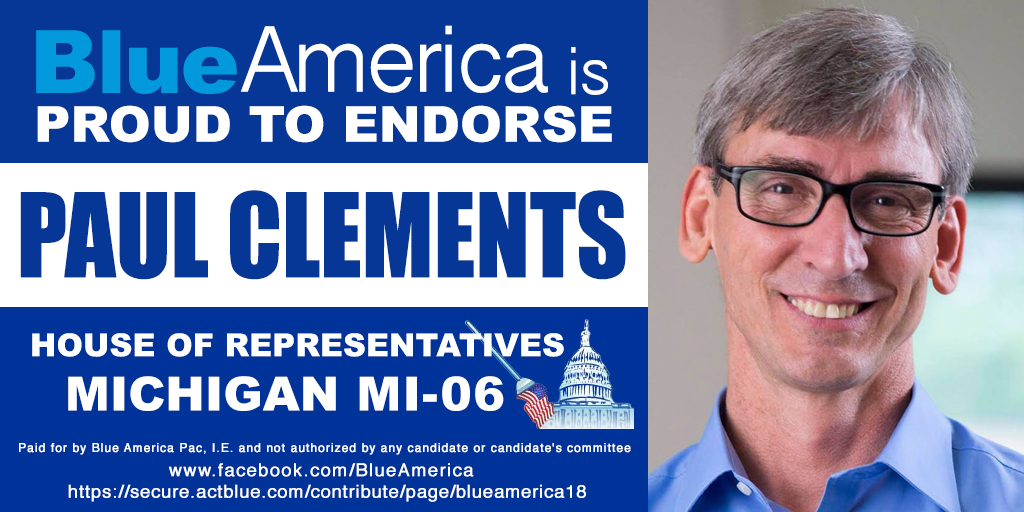 Blue America helped persuade Paul Clements to run for the southwest Michigan congressional seat held by Fred Upton again this cycle. This week one of Upton’s top financial contributors, a multimillionaire corporate lobbyist who has written Upton over two dozen checks, decided to run– as a Democrat!– against Paul in the Democratic primary. We asked Paul to introduce himself to Blue America members who might not remember him from last year.

Make MI-06 Part of the Progressive Wave
-by Paul Clements

Will you make 2018 a turning point? My name is Paul Clements and I want to work with you to make a Blue American Congress that passes single-payer health care, funds vocational education, and ensures that financial advisors work for the folks paying them to protect their retirements and not to line their own pockets.

I am deeply appreciative for the support of Blue America. Will you join me to show DC that we will not stop fighting for progressive values, that we will stand up to Trump and to the big corporations that seem to have bought our party?

This is my third-time running for the House– and each time I’ve seen our movement grow stronger.

Today I work as a professor teaching national economic development and program evaluation. I am also a life-long activist for social justice. As a former missionary kid and Peace Corps Volunteer, I’ve seen how a little assistance and a lot of hard work and political will can turn around economies and challenging social conditions. We need deep changes in our economy– and I want to help deliver those changes for you.

I’m running for Congress against the climate science denier the LA Times called Congress’ “#1 enemy” of planet earth. He’s the Koch brothers’ ally that Mayday called “one of the most corrupted by big money in Congress.” He’s the guy who personally got the awful Republican health care bill through the House of Representatives: Fred Upton.

I’m running to fix the fundamentals– to get big money out of politics– to reform health care, education, and criminal justice– to increase production in America and rebuild our infrastructure– to raise the minimum wage– for American leadership against global warming– to continue the struggle for racial and gender equality.

Only grand vision and deep change can get our economy working for the people. Working families in my district are struggling to put food on the table. As our economy has left some people behind, drug and alcohol abuse are rising and life expectancy is actually falling for some demographics. Students mired in debt can’t start their lives. Too many Americans languish in prison for nonviolent offenses.

Meanwhile, the Republican Party peddles snake oil, pretending lower taxes will solve our problems. But the Democratic Party plays the big money game too. Plenty of Democrats have sold out, or just lack imagination. If we want America to be the democracy that sets the example the world wants to follow, well, we have work to do.

Will you help me get to work for Michigan’s 6th?

Health care is in crisis, so it is a priority. The fact is, a system based on private insurance doesn’t work for health care. Health care should be a right in America, and experience from other countries shows that with single-payer we can be healthier and pay less.

The cost and complexity of health care is holding American business back– but so are our education, infrastructure, and criminal justice systems. Good preschool pays for itself 10 times over. Let’s provide it for all our children. Let’s build really good vocational education, and retrain workers who lose their jobs with skills employers need. In the 21st Century a high school degree isn’t enough. Let’s make community college, vocational ed., and public university free for working families. Many rural homes in my district can’t get high speed internet and our bridges are crumbling: America needs a 21st century infrastructure.

I’m running for Congress because I believe in America and in our future. People struggling economically in my district, people languishing in prison for nonviolent offenses, and the rest of the world all need the American democratic experiment to succeed. But the people who put our current system in place did it for a reason. They did it for profit, and sometimes for power. We won’t turn it around without a fight.

Bernie Sanders built a movement. With his endorsements for my 2014 and 2016 campaigns, I am proud to be part of it. But this movement has just begun.

Let’s work together to make it happen. Please join me today.

I hope you’ll visit my website, clementsforcongress.com, to learn more about my positions and to get involved with the campaign.

A New Beginning– Progressive Leadership In The San Fernando Valley

We have purchased https://t.co/Vx597Ir0gH and will build it out this year.

Let’s talk about the radical idea of universal basic income to build a foundation for everyone regardless of situation to have unconditional access to enough resources to cover food, shelter, clothes, and education.