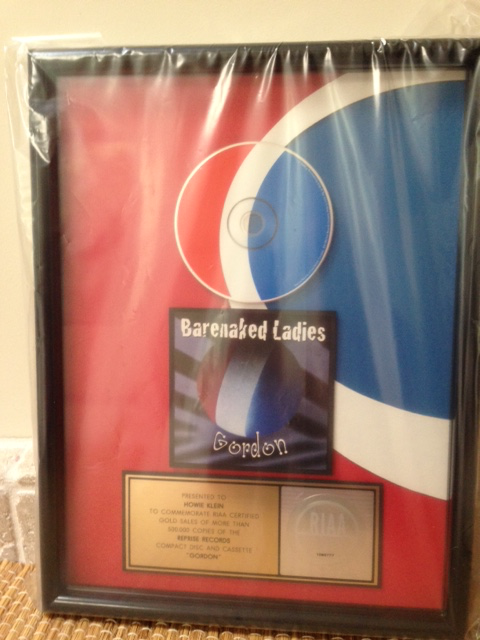 Today is Day One of a week long contest on behalf of the Tim Canova congressional campaign in South Florida (FL-23 which starts up at the Fort Lauderdale-Hollywood Airport and works it way south and west through Hollywood to Surfside in the south and Weston in the west).

It’s Debbie Wasserman Schultz’s safe gerrymandered district. We’ve contributed a beautiful gold, RIAA-certified  award plaque for the Barenaked Ladies’ first U.S. album, Gordon, the album that includes, “Brian Wilson,” “Be My Yoko Ono,” “Hello City” and the band’s smash hit, “If I Had $1,000,000.” The album award, which has never been taken out of its plastic wrapping, was originally awarded to Reprise Records president Howie Klein, now the treasurer of Blue America. One lucky donor who gives to Tim’s campaign before next Monday– in any amount– will be the proud new owner of the Barenaked Ladies’ Gold award plaque.

Tim is running on a full-bore Bernie type platform– issues he has been working on his entire adult life, from campaign finance reform, protecting the environment and ending the war on drugs to reversing income inequality, immigration reform and Medicare-for-All.

As of December 31, the last FEC reporting deadline, Tim had raised $161,996. He’s going to need a lot more to defeat a corrupt incumbent who has taken massive amounts of money from payday lenders, private prisons and Wall Street. Please consider helping him reach his first quarter goal here.

Tim told us he finds

“the Barenaked Ladies music to be playful, offbeat and thought-provoking at the same time. On this album, ‘If I Had a Million Dollars’ is a strange kind of love song for a material world. The message is: ‘If I had a million dollars, I’d buy you a house, furniture, a car, I’d buy your love.’ Money certainly helps up to a point, but we know that money alone cannot really buy love or happiness. As I listened to this song this morning, I thought what would I do if I had a million dollars?  And I realized I would spend it on exactly what I’ve been investing my limited personal savings in: our campaign to defeat Debbie Wasserman Schultz and our lawsuit to inspect the ballots from our last race. That lawsuit is what prompted local election officials to destroy our ballots in violation of state and federal law. I am not letting this election scandal be swept under the rug, because I know the best way to ensure a fair vote count in our upcoming election is to demand a real investigation and accountability for the fraud and illegal ballot destruction in the last election. With your help, we will raise another million dollars and we will use those resources to keep building our grassroots campaign. This remains the top priority in my life: to defeat a cynical and corrupt political insider who has done so much damage to our country. If I had a million dollars, I would still be fighting to restore democracy.”

Primaries against incumbents of your own party are the toughest thing there is in American politics. It’s a thankless task, with your own party fighting you every step of the way and moving in to protect their colleague, no matter how corrupt she is. But in this D+11 district there is no other way to hold Wasserman Schultz accountable than to challenger her in a primary. A New Dem, from the Republican wing of the Democratic Party, she hasn’t earned a lifetime job, not by a longshot

Please help us replace her with Tim Canova. (You’ll find all the “rules” to the contest at the link.)