Joe Crowley Must Be Stopped– Alexandria Ocasio-Cortez Can Do It 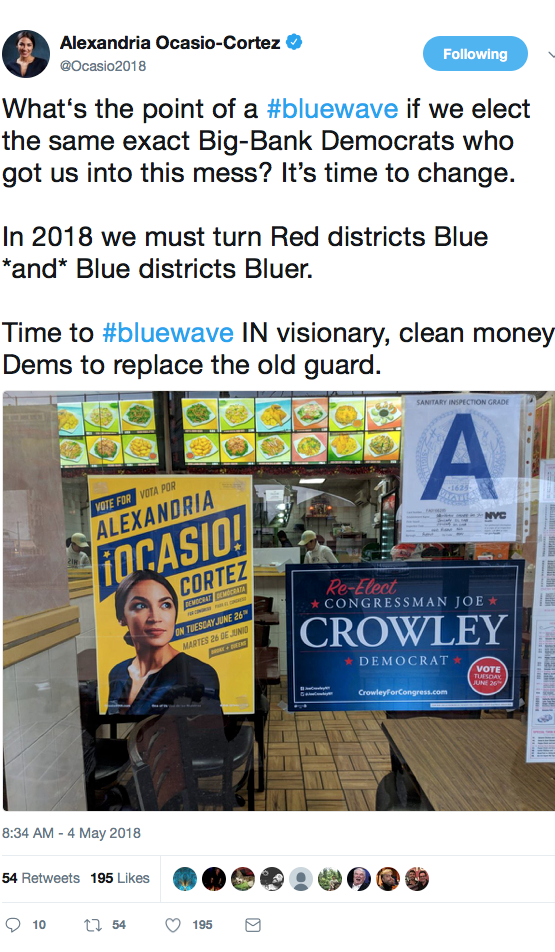 Earlier this week Bernie sent his supporters an e-mail explaining what he hopes to accomplish by barnstorming in Pennsylvania with congressional candidates Jess King and Greg Edwards. He wrote that “if we are going to defeat right-wing Republicans in 2018 and 2020, we need to win in states that Trump won, like Pennsylvania. And, in my view, the only way we win in those states is by supporting progressive candidates who have the guts to defend working-class families — white, black, Latino, Asian American, Native American — and take on the power and greed of the billionaire class.”

And not just in Pennsylvania, of course. He wrote that “Trump represents something we have never seen before in the history of the United States. It is not just that he represents the interests of the wealthy and powerful. It’s that we have never had a president with more authoritarian tendencies than him… The 2018 midterm elections will be long remembered as a pivotal moment in American history because, if we are successful, we can put an end to the disastrous Trump agenda. If we are not, we will have at least two more years of a rapid shift toward authoritarianism, the further normalization of corruption and the continued rise of oligarchy.”

Perhaps his most crucial lines were how “we cannot defeat Trump and the Republican Party with the same playbook, or by supporting the same kind of candidates long favored by the political establishment and financial elite. That is how we got to where we are today.”

The media doesn’t give much coverage to Alexandria Ocasio-Cortez, a Bernie campaign organizer from the Bronx who’s running for Congress herself now on a very Bernie-like platform — including Medicare-for-all, free public higher education and a federal jobs guarantee that would promise jobs with a $15 minimum wage as well as paid family leave and campaign finance reform.

And maybe that lack of mainstream coverage could be at least partially explained because she’s running for a seat occupied by an “untouchable” political power-monger, Wall Street’s owned-and-operated ‘Queens County machine boss’ Joe Crowley. 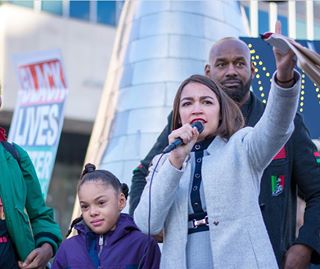 Crowley isn’t just the most corrupt Democrat in Congress, he’s Nancy Pelosi’s and Stenchy Hoyer’s hand-picked next Democratic House Leader, when Pelosi retires halfway through the next term (as is widely rumored on Capitol Hill).

Alexandria, a Blue America-endorsed candidate, is the first person to challenge Rep. Joseph Crowley in a primary race in 14 years. She’s also the first woman of color to ever run in New York’s District 14, which covers parts of southern Bronx and northern Queens.

Alexandria has raised $115,653, entirely from grassroots contributions. Please consider helping her stand up to him by clicking on the ActBlue 2018 congressional thermometer.

…Born into a working-class Puerto Rican family, Ocasio-Cortez says she understands the challenges working New Yorkers face. Her mother was a housekeeper, and her father owned a small business. The family moved upstate while she was growing up, but she returned to the Bronx after going to school at Boston University, and she now lives in Parkchester.

She is a harsh critic of Crowley, a Woodside native who has represented Queens and the Bronx in Congress since 1998, and denounces his influence on area politics because of his role as chair of the Queens County Democratic Party… “This Tammany Hall system of political machines actually disenfranchises communities because this old-school system of politics exists to prop up the already powerful,” she said.

Crowley has undermined and opposed progressive ideas and positions for years in Congress, when he headed the New Dems, basically, the Republican wing of the Democratic Party. Once he visited his district from his home in Virginia and realized over 70% of the district was made up of people of color, he quickly quit the New Dems and started “changing” his long-held anti-working family positions.

Alexandria is authentic; Crowley will never be.

We are encouraged about what she’s already been able to accomplish — with basically ‘one arm tied behind her back’. Imagine what it would feel like to wake up June 27 to find that the first woman of color candidate ever had taken down a powerful, 14-Year ‘Establishment’ Incumbent who was poised for leadership.

Please consider giving whatever you can to Alexandria Ocasio-Cortez’ campaign today.

Thanks for always doing what you can to make this a better world,
— Howie, for the entire Blue America team