CA-42 is a new, open blue district in the southeast corner of L.A. County and residents have a big decision to make between a well-funded DINO, Long Beach mayor Robert Garcia and a grassroots champion Assemblywoman Cristina Garcia.

She’s a progressive with every breath she takes; he’s a conservative pretending to be a Democrat. He registered as a Republican, fought for Republican causes, worked as the California youth coordinator for the George W. Bush campaign, founded 2 Republican clubs in Long Beach and was elected to the city council as a Republican before realizing that in an area that was going bluer and bluer, he had to start pretending he was a Democrat too. So he changed his party affiliation– but not his conservative mindset.

CA-42 stretches from communities in SELA (South East L.A.) in the north, south into Long Beach, in the midst of one of the state’s most pollution-impacted areas. And that brings us to Cristina, an environmental justice hero who wrote and passed– against determined opposition from politically-connected polluters— the landmark Assembly Bill 617 to deal with air pollution.

Cristina grew up in Bell Gardens, a SELA working class community filled with high-aspiration Latino immigrants who work hard so their children will be able to live the American Dream. A self-described “nerdy math whiz,” Crstina earned a scholarship to Pomona College to study math, graduated and then earned a master’s degree in more math. SELA’s local government was riddled with incompetence and corruption. She told me her neighbors were always asking why “They always seem to be taking trips to nice places, but they can’t pave the streets and all while things seem to be getting more expensive, even the pool that was once free now had a charge?” She asked a related question: “What are we going to do about it?” She helped found !BASTA! (‘enough’ in Spanish) with other local activists.

The now legendary work !BASTA! did led to a Pulitzer Prize for the L.A. Times reporters who covered their activism, detailing a city manager who was using city coffers like his own private trust fund– expensive trips, homes, cars all on the city dime and a corrupt city council bribed into silence by high salaries, perks and favors. !BASTA! worked, successfully, to recall the city council, change the city charter to mandate transparency and best practices, and to elect a new reformist city council.

Cristina ran for an Assembly seat against a neo-liberal from one of SELA’s most long standing Democratic political dynasties. The Democratic establishment in L.A. and Sacramento always support corruption and blackballed her campaign. And she won anyway, delivering a shock from below to the power-mongers and dictators in the Democratic Party.

She told me that when she got to Sacramento she was “full of piss-and-vinegar. “I was determined to make a difference for front-line communities like Bell Gardens,” she told me. “Good government and environmental justice were the issue that would change the lives of SELA families. Surprisingly, I had quick and early success in passing good government legislation, although when I first spoke up and urged reforms, I was again told by leadership to be quiet.

But… the FBI raiding the office of a Democrat state Senator and the indictment of another on racketeering was enough to shame leadership into supporting reform. “They still grumbled,” she said, “but I was successful in getting written into law the landmark Political Conduct, Ethics and Public Trust Acts of 2014. My laws demand increased accountability and promote transparency and trust in state and local government. I also got a series of anti-corruption and good-government laws passed to eliminate influence peddling by lobbyists, increase the penalties for politicians who take bribes, and expand transparency in what state or local government agency must publicly disclose concerning government salaries, benefits and per diems.”

Because of her bravery and ethical stances, she made a lot of political enemies. Today they are all supporting Robert Garcia against her.

After tackling corruption, she turned her focus to environmental justice. She told me she learned real fast that “passing laws to deal with the systemic classism and racism of environmental justice was a whole different challenge altogether. Writing legislation to force polluters to change their behavior was anything but a no-brainer.

“My goals for creating a cleaner and more just environment for frontline communities pitted me against some of the Democratic establishment’s mainline supporters– oil companies, refineries, incinerators, the trucking industry, the building trades unions that those industries employ, and, most significantly, so-called ‘business Democrats’ in my own caucus who looked askance at the need to prioritize public health and climate change. I was attacked and called a job killer. These groups kept forcing the false narrative of jobs over my communities’ health.” Basically, the “Mod Squad” legislators told her that the practices of Big Business, whose pocketbooks were filling at the expense of poor communities were… just the way things were. “We didn’t matter; we were disposable. But I stuck to my principles and continued to preach the gospel of the Green New Deal, long before we called it the Green New Deal, which means we can have both healthier cleaner communities and robust economic growth and clean and sustainable industries and a vibrant job market. I didn’t and haven’t backed down. Because one thing I learned is that establishment is full of hubris, and they believe they can intimidate anyone who rebels against their neo-liberal proclivities toward government by crony capitalism.” 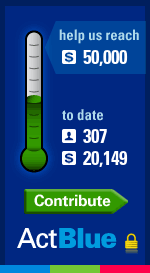 Just look at all the “progressives” lining up behind her Republican DINO opponent today– every paid off political hack in the state from Gavin Newsom and Rob Bonta to anti-healthcare sociopath Blue Dog Lou Correa.

Cristina hasn’t been intimidated; her communities stand behind her even if L.A. power players don’t and never will. Her successes didn’t come from shyness or reticence to take on those power players. She’s earned our help by what she’s done in Sacramento.

I expect her to do a lot more in DC, if we can raise enough cash to counter the Establishment Hacks who are scared to death she’ll win.

Please contribute what you can by clicking on the Blue America thermometer on the left.

Learn more and volunteer to help her here.