Blue America’s John Laesch on Hastert: ” He says he listens to everything and he remembers everything.” 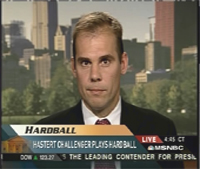 Blue America's most excellent John Laesch, who is running against Denny Hastert in IL-14 was on Hardball the other day and has a problem with Predatorgate/ Hastert's memory issues.

Maybe he couldn't remember that he wrote a book at all…

(Full transcript below the fold) (please donate if you can)

MATTHEWS: Do you think—we have some tough customers on this show, Pat Buchanan, as you know, he‘s a pretty tough customer on the cultural values front. And we had Tony Perkins, who‘s a Christian conservative activist, the other day, a leader, I should say. Both raising the question, maybe it‘s a hobgoblin, it‘s being raised now in the this context, should we have—should gay people serve in Congress? These guys raised this issue. And do you think that is a fair issue to raise, to broad brush people who have that orientation, given these events?

LAESCH: No. I think America is a country of equality and that every person should have equal rights, regardless of your race, creed, sex, sexual orientation.

MATTHEWS: And so you think that is a wrong attitude about this case?

MATTHEWS: So you believe a gay member of Congress can serve with the same kind of sexual restraint expected of a heterosexual member?

MATTHEWS: Every member of Congress should be held accountable by their actions by the voters. We live in a democracy. Right now you see a page who was sexually abused, who was pretty much voiceless, and is now taking on the highest levels and the highest members of Congress. In a democracy, everybody is supposed to have equal opportunity and their voice is supposed to be equal. And you‘re starting to see democracy play its course here.

MATTHEWS: So you believe Mark Foley abused that former page?

LAESCH: Well, at least he, you know, was acting in inappropriate behavior, you know, sending unwanted e-mails to several members.

Do you believe that Denny Hastert is a man of character?

LAESCH: I think that this issue has defined the clearest difference between myself and Mr. Hastert, that being I stand for honesty and integrity..

MATTHEWS: And he doesn‘t?

LAESCH: … and I‘ll let the voters decide where he stands.

MATTHEWS: But you‘re not challenging his character here or word? Is that right? You don‘t challenge his word here? You think he might be telling the truth?

MATTHEWS: OK. Thank you very much, John Laesch, the Democratic candidate running against Speaker of the House Dennis Hastert.