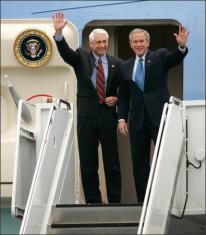 Not only is Dave Reichert an ineffective congressman, but he has a twisted sense of humor, as the Tacoma News Tribune’s Niki Sullivan reports:

Right now, U.S. Rep. Dave Reichert is up. He repeated a joke I first heard him tell at the Pierce County Republicans’ Lincoln Day breakfast earlier this year. It involves an airplane that’s going to crash, one fewer parachute than passengers and, ultimately, Hillary Clinton dying.

It sounds, as David Goldstein observes, like an unoriginal, crass schoolyard joke I used to hear all the time from classmates when I was younger and attending elementary school. [..] The punch line relies on the assumption that the adult in question is stupid.

Now, Reichert or anybody else can argue that Hillary Clinton is ambitious, or stubborn, or shameless, but she is certainly not dumb.

To her credit, she’s exceptionally sharp and calculating in addition to being determined… and that has carried her a very long way.

Joking about the death of one of the two Democrats seeking the presidency, if not inappropriate, is certainly not classy, and is further evidence that Dave Reichert himself does not have good judgment.

Perhaps this is because he isn’t truly invested in his job.

He doesn’t work hard on Capitol Hill, his campaign is ambling or meandering along at a lazy pace, and he’s frequently careless with his choice of words. Last cycle his campaign finished with a condescending, sexist TV ad.

Reichert is running against Blue America candidate Darcy Burner. Please considering helping Darcy’s campaign so we can show Reichert out the door.