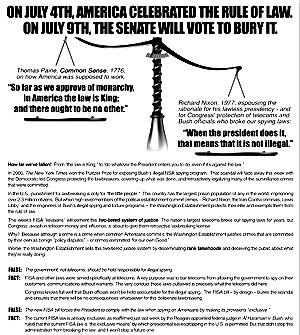 Check out the new full page Blue America ad placed in the Washington Post today. Thank you all so much for donating to our Blue America/FISA fund so we’re able to get our message out far and wide. We believe in the Constitution and so should you! We also bought ads to run against Barrow and to support Regina Thomas in the upcoming GA-12 primary on July 15th. I’ll write about that later. When Bush got together with Congress to grant retroactive immunity, that was just unacceptable to many of us.

Donate here to help elect better Democratic candidates to represent our values. Blue America has had great success so far. And you know, a major reason that Blue America exists is to push a progressive message into districts where it’s never heard regardless if we win or lose a seat. We still win by getting that message out into the atmosphere.

Almost 6,000 people have donated so far and we have run TV, radio, and newspaper ads in Chris Carney’s Pennsylvania district, newspaper ads and patch-thru calls explaining to Steny Hoyer’s constituents (and colleagues) his odious role in this massive betrayal of Democracy. …we are running the following full page ad in the Washington Post and the day after we will explain our efforts to hold John Barrow (GA-12) accountable for his outrageously anti-American votes

Keep making your calls because the vote is coming tommorrow.

“Congress must remain vigilant in order to protect Americans from another terrorist attack. However, the bill that is before Congress this week bargains away the privacy of law-abiding American citizens while protecting the companies that allegedly participated in the President’s illegal wiretapping program. The Senate should stick to the narrow fix it set out to accomplish by making it clear that the government does not have to obtain a warrant to listen to foreign-to-foreign communications. Instead, this bill allows a significant expansion of the Foreign Intelligence Surveillance Act so that government can eavesdrop on the international communications of innocent American citizens. Since losing my brother on 9/11, I have vowed to improve America’s anti-terrorism capability without sacrificing the freedoms that so many Americans have died to protect.”
— Andrew Rice, Democratic candidate for U.S. Senate, OK

(You can see the full page ad under the fold.) 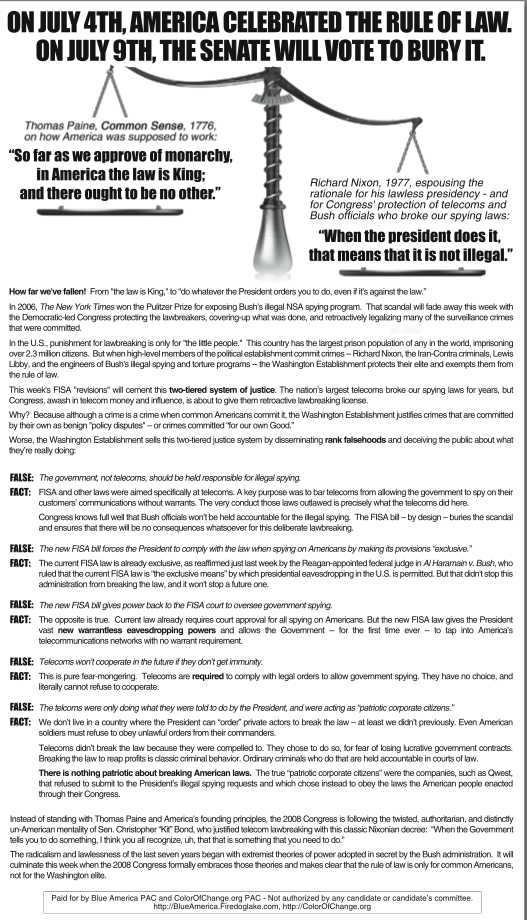