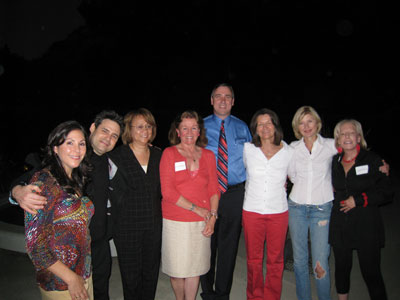 Last week I invited Southern California DWT readers to come meet Oregon’s Senate candidate Jeff Merkley in Los Angeles and promised John and Digby would be there too. Digby couldn’t come herself but D-Day joined John, the incredible Hopelettes, and an enthusiastic bevy of wonderful progressive friends and neighbors (and me) in welcoming Jeff to town. Next time I promise to post the invitation here at C&L too. (Hint: keep your September 9 lunch hour open.) Meanwhile, we had a great time with Jeff, who showed us exactly why everyone is saying he’ll be the closest thing to Paul Wellstone the Senate has seen after he ousts Bush rubber stamp Gordon Smith in November.

Anyway, Smith has taken immense amounts of special interest money from every corporation looking for an easy mark. While gas prices have been going through the roof, he scarfed up $293,325, and voted for every initiative Big Oil has ever wanted– everything that has led to out of control gas prices. While the real estate market was plummeting, Smith took in $733,462 from the real estate industry, $317,071 from lobbyists and another $518,630 from investment companies– that’s over a million and a half reasons for him to join the GOP deregulation jihad that has made sure the federal government would have neither the will nor the means to protect consumers and workers from the excesses of out-of-control predatory capitalism. Please give us a hand in raising some funds for Jeff to fight this attempt by corporations to continue to buy our democracy. Here’s Jeff talking about how he’d like to handle the Iraq problem; it’ll give you an idea about why we’re so excited about him replacing Smith: