Please Vote In Our Blue America “Red to Blue” Contest 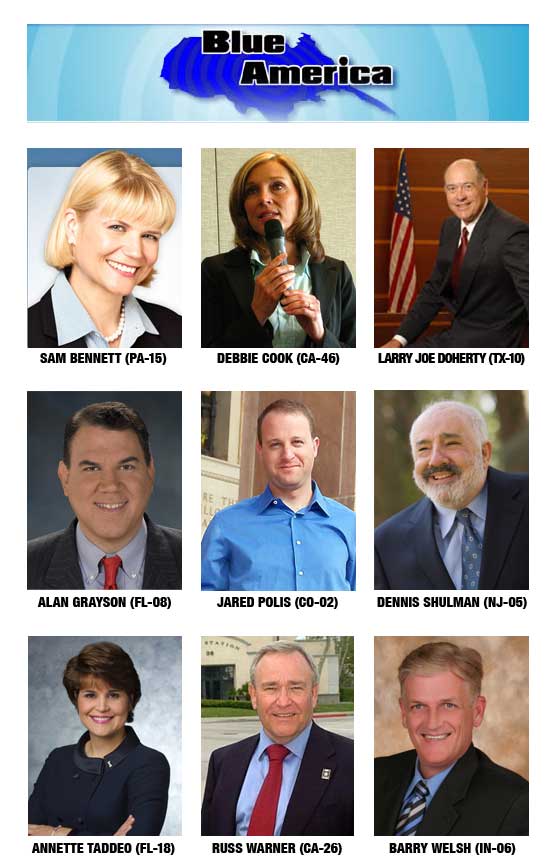 Saturday morning Crooks & Liars joined with our partners at FDL, Digby’s Hullabaloo and DownWithTyranny to announce a week-long competition among some of our Blue America House candidates. We’re offering $5,000 to candidate who gets the most votes from the readers of the four blogs. These are all candidates who are not on the DCCC’s Red to Blue list.

Since Saturday morning there have been 293 donors and Russ Warner, who’s running against L.A. area Bush rubber-stamp David Dreier is way out in front. Russ’ supporters have tossed in over $3,000. Altogether over $7,500 has been raised for the 9 candidates so far, aside from Russ, Debbie Cook (CA), Annette Taddeo (FL), Dennis Shulman (NJ), Larry Joe Doherty (TX), Alan Grayson (FL), Barry Walsh (IN), Sam Bennett (PA) and Jared Polis (CO).

We asked Democratic Party bosses Rahm Emanuel, Steny Hoyer, Chris Van Hollen, and Debbie Wasserman Schultz to each match our $5,000 check to the winner. None of them have… responded yet. Don’t forget to vote! Winner will be announced next Saturday.