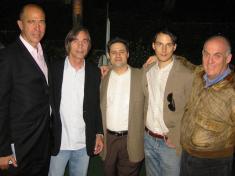 We didn’t make a big fuss about raising money “at the end of the quarter” like everybody else did. You were probably inundated with requests from every politician you ever pass on the street talking about yesterday’s midnight deadline. We just tend to not get into the hysteria. Happily, though, more than a few generous donors decided to make their contributions through our Blue America page and our total for the year is over $405,000.

Today’s the first day of the new “quarter” and Crooks & Liars has a gorgeous pair of tickets (4th row, center) for a Jackson Browne concert this Saturday, October 4, at L.A.’s historic and intimate Orpheum Theater. Jackson gave the tickets to Debbie Cook’s campaign when he endorsed her and she passed them along to us so that a Blue America donor would get an opportunity to be able to go to the sold out show– other than by going on eBay and paying $500 to a scalper… When you donate to our ActBlue page— any amount– and your name gets put in a hat and, if luck is with you, you’ll win the pair of tickets. If we were a Republican PAC we’d just say the pair goes to the highest bidder– or maybe we’d scalp ’em on eBay ourselves– but we like this idea more because even people who can only afford to donate $1 get a chance to win the tickets. The contest ends tomorrow at 2pm, PT. One rule: one chance to get into the drawing per screen name.

Debbie is one of Blue America’s priority candidates for November, not just because she is running against one of the worst rubber stamp Republican goons in Congress, the execrable Dana Rohrabacher, but because from the first day she gets there she will be the best informed voice on Capitol Hill on progressive public energy policy. Whether you win the Jackson Browne tickets or not, a donation for Debbie Cook is a win for a better vision of our country.