Dave Reichert: Another lying Republican hypocrite exposed — no thanks to the media 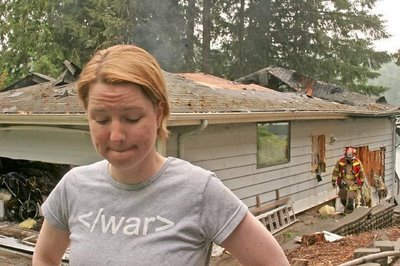 It stands to reason that Darcy Burner’s opponent, Republican Rep. Dave Reichert of Washington’s 8th District, would be getting desperate about now. After all, the most recent polling consistently shows him trailing Burner by about four points.

So of course, he’s been trying to smear her with a cheap falsehood about her Harvard degree. And in the process, he appears to have really stepped in it. From Goldy at HA:

Problem is, Reichert never earned a B.A. from Concordia in 1970, because they didn’t even grant their first bachelors degree until 1980. In fact, the year Reichert started was Concordia’s first year as a Junior College; before then, it was merely a Lutheran high school.

What Reichert has is a two-year Associates degree from a small, Christian, Junior College. (And possibly, not even that; has Heffter bothered to ask Concordia’s registrar for Reichert’s records?) Thus Reichert’s official bio, which he has allowed to go uncorrected for four years, and which has been picked up by numerous news organizations and other web sites, is an undisputed lie.

You see, Reichert has been spreading the story that Burner fluffed up her resume by claiming to have a degree in economics from Harvard. And sure enough, the Seattle Times — which has a long track record of explicit animus toward Burner — bit on the story.

It gave the Reichert team the chance to pounce:

“It calls into question everything that she has said to this point,” said Amanda Halligan, a spokeswoman for the Reichert campaign. “It demonstrates an arrogance that she thinks she can say what she wants and that no one is going to learn the truth.”

The problem is, as Matt Stoller explained in some detail yesterday, it’s all bullshit:

The story is literally made up out of whole cloth. Burner has a degree in computer science and economics from Harvard, as her website says. Having gone to Harvard, I know how this works. You get a degree under one department, take classes in another, write a thesis joining the two, and that thesis is reviewed by professors from both departments. It’s actually much harder to get a joint degree, but the registrar shows a degree only from one department because Harvard doesn’t have minors. In fact, economics is a fairly easy degree to get, while computer science and economics takes a lot more work.

Indeed, here are the words of the same Harvard dean quoted in the Times’ story:

I’m the professor and ex-dean who was quoted in the story, and as it happens, also the guy who wrote the CS degree requirements. At the time Darcy was at Harvard, she would have needed, as part of her CS degree requirements, several courses in a technical specialization area related to CS. She fulfilled that CS degree requirement by specializing in Economics (which meant, by the way, that she couldn’t have taken just the easy, non-mathematical Ec courses). So it’s not exactly a minor (which we didn’t have then, though we do now), and it’s also not anything that the registrar would be able to certify (because it’s an internal requirement of the computer science faculty). But it’s something everyone getting a degree in CS had to do (though other students would have other specialties). The way Darcy is describing herself is accurate.

None of this, however, prevented one of the more popular local right-wing radio yammerers, Dori Monson, from going on the air today and pronouncing Burner “a liar.”

Better look in that mirror, fellas.

In the meantime, the rest of us can go to Blue America and donate to Darcy. With the media in the tank for Reichert, it’s obvious she’ll need all the help she can get.