One of Blue America’s earliest and most heartfelt successes came in 2006 when we helped Bruce Braley turn Iowa’s first CD from red to blue. After a stellar first term, Bruce didn’t need help being re-elected. His 64% win in November was the highest margin of any candidate in the state (including Senators Harkin and Obama!). 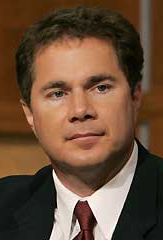 His success has been especially sweet because of the way his candidacy started out. You may recall that in 2005 Rahm Emanuel was running around the country sabotaging progressives and bullying anti-war candidates. He managed to ruin Democratic chances in district after district with his wrongheaded insistence that voters backed his own pro-war position in Iraq and that progressive candidates needed to soft-pedal their opposition to Bush’s (and Emanuel’s) agenda.

When Emanuel went to candidate Braley with that line Braley didn’t buckle; he pushed back and pushed back hard. Emanuel backed down. “I wouldn’t change who I am to run for office. I am running to be a strong voice for change and to speak out for people who don’t have a voice in Washington,” he told us at the time. “I met with Rahm several times and I convinced him that my positions are the mainstream positions in this district. He listened and he understood.”

After his initial win, Congressman Braley caught our attention in 2007 when he took the lead on questioning Bush Regime hack/GSA head Lurita Doan and exposed the Regime’s illegal use of government resources to target Democrats. (See the video up top.) Since then he’s established a solidly progressive voting record in the House and has become a leader at the DCCC. Last cycle he was one of 3 co-chairs of the Red to Blue Program. In the 2010 cycle he is the sole Red to Blue Chair.

You can get a fuller picture of Congressman Braley’s activities over at DownWithTyranny but before he joins us in the comments section here at Crooks and Liars, I want to emphasize one of the exchanges we had on the phone yesterday. When I recounted hard feelings in the netroots about how much money the DCCC spent on conservative Democrats like Bobby Bright and Parker Griffith, both of Alabama, who have already started crossing the aisle and voting with the Republicans on issues as basic as equality for women in the workplace, this was Rep. Braley’s response:

I can’t dispute that characterization. It’s extremely frustrating to me. It doesn’t seem like one of those defining issues that is going to be used against you to paint you as a tool of the Speaker, which is usually what happens in these races in the Deep South. It does seem like this is an issue that is a defining issue for Democratic voters and I would hope that Democrats in those districts in Alabama and around the country would make their feelings known to help educate these new members to the fact that just because you have received support in the past, to pick up an open seat, does not mean that you can ignore what your party stands for when it comes to basic tenets.

He also spoke about the intricacies of prioritizing races across the nation and says he would be delighted to have assistance from grassroots sources:

The challenge for us always is trying to weigh all of the objective data and balance that with subjective input we get and try to make informed decisions that are going to help us expand our majority. Sometimes it’s more of an art than a science and that’s why I would welcome input from the netroots early on and have that as part of an ongoing conversation as we move forward.

Now, please join us in the comments section and help us ask Rep. Braley about building a better Democratic Party and a better USA.

In March 2020, there were ~30,000 new cases of Covid per day which triggered public shutdowns and stimulus checks to help people stay at home.

On Jan. 18 2022 there were 1.1 MILLION new cases and schools, workplaces, and restaurants are open as if Covid never existed.