Judging from the talking points being constantly spewed by the likes of Mitch McConnell (R-KY), Eric Cantor (R-VA), Chuck Grassley (R-IA), Paul Ryan (R-WI), Max Baucus (DLC-MT), Blanche Lincoln (DLC-AR), Mary Landrieu (DLC-LA), Joe Lieberman (DLC-CT), and Ben Nelson (DLC-NE), and by the coverage in the corporate media, all of it driven primarily by corporate dollars, one would think that most people oppose Obama’s tyrannical plans to impose dreaded health care reform on the American people. But, no. Americans overwhelmingly want health care reform. Wisely, they don’t trust the crooked CEOs who run the insurance companies and they don’t trust the bought off, sold out Republicans in Congress. Every single poll that comes out shows that Americans– by gargantuan margins– favor genuine, government-run health care.

That’s why the insurance companies and their shills in Congress are fighting tooth and nail, like mad dogs, to kill the compromise between an Insurance company bailout (the Senate Finance Committee plan authored by Max Baucus and Chuck Grassley) and single payer. The compromise, which offers consumers a choice, is called the “public option.” Anyone who likes their for-profit Insurance company’s service can stick with it. Otherwise, they can opt for the non-profit government run plan. Studies by the insurance industry show that within a couple of years there will be virtually no people choosing for-profit insurance companies.

John is in Florida but he e-mailed me this story from the NY Times and asked me to pass it along and remind people that Blue America is asking for donations for the television ads we’re doing to make Arkansas voters aware that their senator isn’t really their senator; Blanche Lincoln belongs to the Big Business CEOs who have financed her career. While she works behind the scenes to protect the interests of her Insurance Industry patrons, Americans “are strongly behind one of the most contentious proposals Congress is considering, a government-run insurance plan to compete with private insurers, according to the latest New York Times/CBS News poll.” Even half the respondents who admitted they are Republicans prefer this plan, while among normal Americans, the margins are staggering. Look at this chart and then please consider learning more about (or donating to) our Campaign for Health Care Choice. 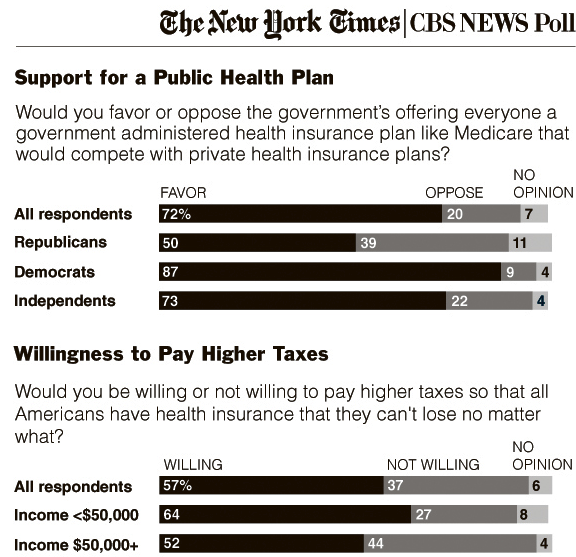