Last week when we had Raúl Grijalva (D-AZ) over to Crooks and Liars for a live chat, we published the text of the letter on tax cuts that he, Alan Grayson and Mary Jo Kilroy had sent to Speaker Pelosi. A few days later Digby, Amato and I met with Raúl in person to discuss the letter and several other topics Digby covered yesterday. He told us that he, Grayson and Kilroy have been working hard to find co-signers and this morning Mary Jo’s campaign sent me the list of Congressmembers who immediately signed on (as well as the nice photo of the congresswoman subtly hinting how much better off Ohio voters would be if they traded in golfer John Boehner for someone who cares about ordinary middle class families): 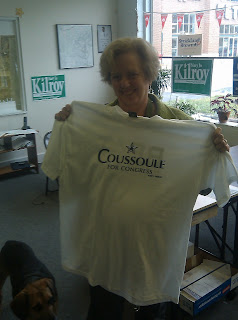 It’s worth republishing the letter:

Last decade, President Bush rammed through Congress a multi-billion dollar give-away for the wealthiest Americans on the backs of our nation’s middle-class. In the process, the aforementioned Bush tax cuts eviscerated an unprecedented budget surplus and weakened our nation’s fiscal health. As the Bush tax cuts are set to expire, we respectfully urge you to bring to the floor, before Congress adjourns in October, a vote on President Obama’s recently proposed tax plan: permanent tax cuts for the middle-class while allowing the Bush tax cuts for the wealthiest two percent of Americans to expire, using any additional revenue to close our budget deficit.

We must show the American people that our Democratic Majority stands for them– people who have worked hard, played by the rules and depend on these tax breaks to make ends meet. We also need to get serious about cutting our budget deficit by allowing the Bush tax cuts for the rich to expire.

Some have argued that the Bush tax cuts help to stimulate the economy, or that allowing these cuts to expire would hurt our nation’s small businesses. This is flat out wrong. According to a recent report by the Center for American Progress, the economy boasted 132 million jobs in June 2001, the month that the first of the Bush tax cuts was signed into law. By June 2004, there were just 131.4 million jobs– a decrease of 600,000 jobs. Furthermore, a recent report from the Tax Policy Center states that, “Roughly 97 percent of small businesses would not be affected at all by increases in the top two tax rates.”

Rather, extending the Bush tax cuts will result in an $830 billion give-away for the nation’s wealthiest Americans, significantly increasing government debt, the interest on which will be paid by our nation’s middle-class for years to come. This astronomical sum could instead be used to close our budget deficit.

It is critical that we pass the Obama middle-class tax cuts– not providing an even greater lift for the wealthiest Americans who don’t need it.

Leading the opposition in the House to middle class tax cuts– with the proviso that they’ll support them if and only if the wealthiest 3% of American families get gargantuan, unaffordable tax breaks that will further harm the economy and balloon the deficit– are Wall Street shills John Boehner and the Young Guns. I spoke to Justin Coussoule this morning about the tax cuts for the middle class and asked him if he were representing southwest Ohio in Congress instead of Boehner if he would have signed onto the letter. He said he would have co-written it.

Alan Grayson was the first Member of Congress to endorse my campaign. Last week Mary Jo Kilroy became the first Member of the Ohio delegation to do so. In between Raúl Grijalva wrote a letter talking about John Boehner’s failure to represent ordinary working families in Ohio and how he is endorsing me because that’s exactly what I’m pledging to do. Between Boehner’s steadfast agenda of giveaways to the wealthy, bailouts to failed Wall Street banks, trade policies that ship Ohio manufacturing jobs to low wage nations like China, coupled with an hysterical refusal to assist average families in a jam because of the very policies he’s pushing, there is a clear difference for voters to see in this district.

Democrats talk about an enthusiasm gap. There is no enthusiasm gap in Ohio’s 8th district. Democrats and independent voters– and more Republicans than anyone suspects– are seriously considering making a change. The letter that Mary Jo Kilroy penned for Speaker Pelosi is a letter I would have been proud to work with her on. I will never support irresponsible, budget-busting tax cuts for the wealthy few and I will always be looking for ways to decrease the burden on ordinary Ohio families and on the small businesses that are the engine of a healthy economy. John Boehner, who still refuses to participate in any debates in the 8th district, is holding tax cuts for 97% of families hostage to the Republican Party’s mania to give away more and more to the richest families whose share of the wealth has increased exponentially since he was elected two decades ago. It’s time for small business and middle class families to get a break and that’s exactly what I intend to devote myself to if the voters in this district decide to replace John Boehner with me in November.

Do the Republicans have any solutions worth considering. Well… polling shows Sarah Palin is the most popular political figure among GOP voters. It makes her powerful inside the party. And in November she has her own slate of candidates running for both House and Senate seats. Here’s a short video that highlights a few of them and explains their solution to unemployment, the economic collapse and tax fairness. Give it a look-see and then consider going here: