Election Day Is Three Weeks Away 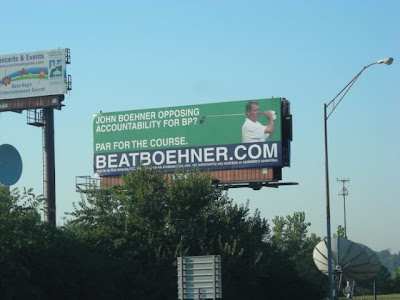 There’s some extra money in the Blue America PAC and we’d like to do something with it… immediately. Can we get your opinion? These are some of the ideas we’re tossing around:

-A new ad in Ohio’s 8th district to help progressives there replace John Boehner– an agent of corporate dominance and of a foreign power– with West Point grad Justin Coussoule. The new ad is on this ActBlue contribution page— and don’t flip out when you see it; we know it’s edgy but it would only be run in Butler, Montgomery and Mercer counties.

-Spread the Virginia Foxx ad out from Forsyth County across all of northwest North Carolina, from Statesville and Mount Airy to Boone. You can see the ad that we hope will inspire voters to replace extremist and bigot Virginia Foxx with upright progressive Billy Kennedy here.

-We haven’t raised enough money to buy TV spots in the Alaska Senate race. And we have a great ad all ready to go. Should we try it? Take a look and if you agree this is a good thing to do, lend a hand.

-Another BeatBoehner billboard! You can vote for the one you think we should put up at the link by clicking on the image you like and donating whatever you feel like putting in. Your contribution, big or small, will count as a vote.

Or perhaps you have another idea. We’d like to know. You can e-mail us at downwithtyranny@gmail.com/ At this point, it’s mostly all about the money to make these things happen, although if you have a great idea to help elect progressives over reactionaries, we want to know about it. Contribute to the one of the ideas above– whether just one dollar or five dollars or… well, the sky is now the limit; the Supreme Court has eliminated all limits, although we are not interested in taking any contributions, no matter now well-intentioned, from anyone who is not an American citizen.

Despite yesterday’s claims from Ed Gillespie, Rove’s partner in deploying millions of corporate dollars into Republican campaigns, neither the NY Times nor the Washington Post has “refudiated” the claims that the U.S. Chamber of Commerce is acting as a funnel between the GOP and malignant foreign interests but putting millions of dollars in rubles and yuan into Republican campaigns.

Both merely quoted Chamber of Commerce officials who only discussed the limited “AmCham” funds, only one of several avenues for foreign funding of the Chamber. Both articles recognized that there is no outside oversight of the Chamber’s money flow. “Money, however, is fungible,” the New York Times editorial board explained, “and it is impossible for an outsider to know whether the group is following its rules.” As the Washington Post’s Greg Sargent writes, “The Chamber still hasn’t addressed in any detail the core allegation against it.”

In fact, Think Progress has carefully shown how the Republicans are getting immense amounts of funding from foreign powers with a vested interest in making sure America is poorly and incompetently governed by idiots like John Boehner and Christine O’Donnell. If we can’t combat that dollar for dollar– and we can’t– we have to combat it by being smarter.