What Has Bobby Bright Earned? 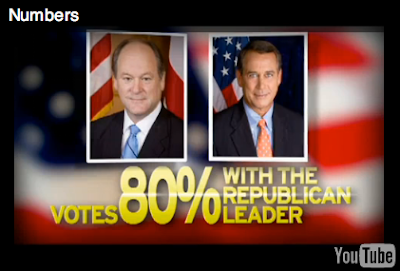 This is from his own ad; he’s braggin’– he even uses a 2 decades old photo of the vain Boehner

You may have noticed a building antipathy here at DWT towards reactionary Democrat, Bobby Bright. Before he started his campaign ads, Bright had already marked himself out as the single most reactionary Democrat in the House. His ProgressivePunch score– a dismal 19.83 (out of 100)– is not just the lowest Democrat’s score; it’s also lower than two conservative Republicans’! Bright has shown his fealty to Boehner on every single contentious issue that has come before Congress in the past two years. In fact, when SCHIP came up for it’s final vote only two Democrats crossed the aisle to vote against health care for needy children and Bright, of course, was one of the two. He has been sure to noisily vote against a woman’s right to Choice (and, like Christine O’Donnell, he’s even been against contraception), against equality for the LGBT community, against health care reform, against Wall Street reform, against energy legislation… You name it– if Barack Obama was for it, Bobby Bright was against it. And that’s been the theme of his reelection campaign, a reelection campaign that the latest polling shows he might be winning.

His ads and campaign statements target and demonize Nancy Pelosi, while building up… John Boehner. He’s flat-out declared he won’t vote for her as Speaker, the minimum Democrats have required of their candidates. This hasn’t stopped the clods at the DCCC from spending more on Bright than on any other Democratic incumbent, close to a million dollars so far with more coming– enough money to have shored up the shaky seats of real Democrats like Alan Grayson, Raúl Grijalva, John Hall, Mary Jo Kilroy and Carol Shea Porter or to have won races by cash-starved progressive challengers Ed Potosnak, Bill Hedrick, Billy Kennedy, Joyce Elliott, Beth Krom and Justin Coussoule. If the Democrats lose the majority– or if its close enough to matter– it is widely assumed in Washington that Bright will jump the fence if he’s reelected and officially join the party he’s always supporting anyway.

But the stupid, incompetent Republicans haven’t figured out how to beat him. They’re busy calling him a Nancy Pelosi pawn in the white suburbs of Montgomery, where he– and his reactionary politics– are quite popular. So Blue America decided to point out his record to some other of Bright’s constituents. Yesterday, we began a massive, targeted radio and TV campaign in just 4 counties, the 4 counties where Barack Obama did best in 2008, the 4 counties most badly effected by Bright’s anti-family votes, the 4 counties that make it hard for a Democrat to win district-wide without landslide victories: Lowndes, Bullock, Barbour and Butler. When the African-American precincts in and around Montgomery were gerrymandered into the 3rd CD, the 2nd was left as a hopeless Republican bastion. It’s a freak of nature that even a throwback Democrat as far to the right as Bright could have ever won the seat. He won it 144,368-142,578… but with massive support from the African-American voters in Lowndes, Bullock, Barbour and Butler counties, voters whose interests he has consistently ignored since being elected. Obama only won 36% of the vote in Alabama’s 2nd CD but he won landslides in Lowndes County (5,447 to 1,807) and Bullock County (4,001 to 1,389) and ties in Butler and Barbour counties. This is the radio ad some local actors have made for us:

It was paid for by a single targeted contribution. No general Blue America PAC money was used to make it or to put it on the air. And we’re aware that not everyone thinks it’s sage to help defeat a Democrat in a perilous election like this. But what exactly does Bobby Bright bring to the table? What good would saving his seat do? He’s already announced he won’t vote for Pelosi (which means he won’t vote to organize the House for the Democrats). He votes with the GOP on every contentious issue. He works within the Democratic caucus to destroy or water down every single piece of progressive legislation he can get his hands on. And he denigrates the Democratic brand with his framing, making it seem toxic to even be a Democrat. Yesterday when Crisitunity at SwingState reported on our I.E., he offered that “This has to be one of the weirdest IEs of the cycle: Blue America is spending in AL-02 of all places, and they’re spending $48K against Bobby Bright. I guess they hate Blue Dogs just that much.” Well… it isn’t really about Blue Dogs per se. We even helped raise some money for one, Mike Michaud (ME) when he worked on the public option and we’ve been fair to moderate Blue Dogs who break from the pack and do good things from time to time, like Patrick Murphy. This is about Bobby Bright and that should be clear to anyone who bothers to look at his record and his political framing. When Democrats passed the DISCLOSE Act in the House, to stop the flow of foreign money into American elections, something they knew would be a boon for the GOP and a disaster for Democrats, Bright was one of the Blue Dogs to cross the aisle and vote with the Republicans. He is one of only five Democrats– each a reactionary– who has been endorsed by the U.S. Chamber of Commerce, the funnel for millions of yuan, dinars and rubles being used to pervert our country’s political system.

If you’d like to help us with this ad, you can do it here. Otherwise, consider helping keep progressive champions like Alan Grayson and Raúl Grijalva in office or help progressive House challengers like Bill Hedrick, Ann Kuster, Justin Coussoule, Ed Potosnak, Billy Kennedy and Joyce Elliott or Senate challengers like Elaine Marshall, Joe Sestak and Jack Conway.

This is a Democratic Party ad that was released this morning. Does it get you angry at Republicans? It should. But every single thing it says about Republicans, it also says about Bobby Bright (upon whose reelection efforts the DCCC has thus far lavished $1,128,188.33):