Who Has The Courage To Stand Up For A Scapegoated Community Of Americans– Not Dan Lipinski, That’s For Sure 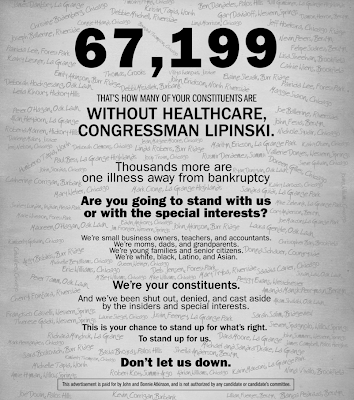 If you’re not from Chicagoland you probably haven’t heard of John Atkinson (yet). If you do live around the Windy City there’s a chance you remember the full page ad (above) from last year, which ran in the Tribune, the Sun-Times and the Southtown Economist. The ads were put together and paid for by John and his wife Bonnie; I’m figuring they cost between $25 and $30,000. But they didn’t work, Lipinski still bragging to this day– and using Republican talking points in the process— that he not only voted for the anti-Choice Stupak Amendment but that he was one of only 33 Democrats to cross the aisle and vote with Boehner against healthcare reform a year ago this month. Lipinski’s ignoring the ads was part of the impetus that has made John throw his hat into the ring in seeking the Democratic nomination for the seat currently held by Lipinski, one of the most corrupt and reactionary Democrats in Congress.

This weekend, John officially registered with ActBlue and he’s looking like a progressive and principled candidate for sending a Democratic Establishment that countenances corporate shills and bigots like Lipinksi a good strong message. You can contribute to his campaign at the Blue America Democratic message page.

President Obama won Illinois’ 3rd CD with 64% of the vote, about 5 points better than either Gore or Kerry did. It’s a solid Democratic district and there is no reason the party needs to keep nominating a Republican-lite shill like Lipinski, whose politics are more in tune with his home in Tennessee than with Cook County. The 3rd has one of the highest concentrations of Muslim-Americans of any district in the country and yet Lipinski, who never shuts up about super-serving Polish-Americans and other ethnic groups represented in the district, has been silent about the plight of Muslim-Americans unfairly targeted by Republican bigot Peter King in his McCarthy-like Homeland Security hearings. The day after King began his anti-Muslim hysteria, I asked John Atkinson if he would be handling this situation differently than Lipinski. He graciously agreed to write a guest post for us:

Representative Peter King (R-NY)– in the latest example of his Party’s relentless pursuit of a narrow ideological agenda– has found yet another way to distract this new Congress from focusing on the issues that really matter to American families and businesses. Instead of working together to create jobs, pass a responsible budget, address growing concerns about our dependence on nonrenewable resources and foreign oil, the Republican leadership in the House of Representatives is spending their time investigating what they’re calling “The Extent of Radicalization in the American Muslim Community and that Community’s Response.”

Unfortunately, these hearings aren’t just a waste of taxpayer dollars, the King hearings are an affront to our hard-working, patriotic Muslim American neighbors; and an embarrassment to anyone who believes in the American principles of fairness and religious freedom. We have Muslim Americans dying in defense of our country, teaching our children, healing our sick, serving in Congress, and living next door. They are our friends and our fellow citizens. And, according to law enforcement officials, they are on the front lines of homeland security, working hard to identify and stop those who are or may be engaged in terrorist activities.

It is outrageous enough that Peter King and his Republican colleagues are leading the charge against our Muslim American neighbors. Something is deeply wrong in this country when we begin drawing lines to separate us from each other. We deserve leaders who will bring us together– black and white, gay and straight, people of all religions and no religion at all, people of every language and every ethnicity– to help us work together to meet the challenges that confront us all.

There is no question that extremism is a threat to our security-– but extremism is not limited to any single group. On the day before Peter King opened these hearings, law enforcement officials arrested a neo-Nazi in a plot to murder 1500 Martin Luther King Jr. Day marchers in Spokane, Washington. And on the day the hearings opened, police arrested five people, including the head of the Alaska Peacemakers Militia, an anti-government “Patriots” group, in a plot to murder judges and state troopers. (Source: Southern Poverty Law Center, http://www.splcenter.org/blog/2011/03/11/the-screaming-hypocrisy-of-peter-king/#more-6017)

Mr. King, why aren’t we investigating “The Extent of Radicalization in the “you name the group” Community and that Community’s Response”? Because, Mr. King, in America it is not OK to indict a whole community of people because of the illegal actions of a few.

There have been times in our history when we look back and we know that our leaders, who claimed at the time to be acting in the interest of national security, got it horribly wrong. This is one of those times.

Blue America is getting to know John but my guess is that he’s a very good prospect for an early endorsement. Like I said, right now you can help launch his primary campaign at our Sending the Democrats A Message page.